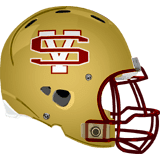 A couple of firsts took place on Saturday afternoon inside of Hershey Park Stadium. Most importantly for Steel Valley, they won the school’s first ever football state championship. They also became the first team in PIAA history to Mercy Rule every opponent in every game throughout the season. “We certainly have a ton of respect for Southern Columbia. What their staff has done with the program has been unbelievable and the best in the entire commonwealth,” said Ironmen coach Rod Steele. “Today though, our best 11 guys were able to beat their best 11 guys. We have challenged our players all year and they didn’t disappoint.”

The Ironmen were also the first team to beat the defending state champion Tigers in the last 757 days. SCA’s lass loss came in November of 2014 to Montoursville. “We had one goal this year and that was to win the gold. The entire team has been training as hard as possible since our playoff loss last season. I think it definitely paid off today against Southern with our lifting and winning the battle upfront on the line,” said Steel Valley lineman Kaleb Hughes. The Ironmen controlled the offense and defensive line throughout the day. The loss for the Tigers was the first time that they have suffered a Mercy Rule defeat since 2010 and just the fourth time overall since the rule was implemented in 1998. It also tied a 42-0 loss to Mount Carmel Area back in 2002 for the biggest blowout loss this century.

Steel Valley got off to a start that was even better than anyone could have dreamed of. The Tigers won the toss and decided to receive the opening kickoff. Freshman Julian Fleming fumbled the opening kickoff and the Ironmen recovered after Hughes knocked it free. On the very next play, they scored on a 26-yard pass from Ryan Harper to Paris Ford. The Pitt-recruit caught it and shook off a tackle attempt from Fleming to put Steel Valley up 7-0 just 15 seconds into the game. “It felt like I gave my team that spark that we needed and it happened at a great time right at the start,” Ford said.

The Tigers were able to weather the early storm on their first offensive drive by going 75 yards on 10 plays. “Our guys have handled adversity well coming into this game and that was an example of it. Unfortunately, that was the only time we were able to answer after their scores,” said Southern coach Jim Roth. Fleming caught a 31-yard pass and two plays later Cam Young caught a 24-yard pass from Stone Hollenbach to tie the game at 7-7. From that point forward unfortunately for the Tigers it turned into the Wild, Wild, West.

Junior halfback Najheir West was a reserve all season to 2,000 yard rusher DeWayne Murray for Steel Valley. Last week, Murray hurt his hamstring and West took advantage of his opportunity. “I was just hungry for a state championship. I had the mentality that every time I touched the ball I wanted to score six,” West said. With Murray still not at full health, West was the lead back and put on one of the best performances in state championship game history. He scored five of the final six touchdowns in helping Steel Valley finish off the game scoring 42-unanswered points. “West has been great for us all season. He may not have had the numbers coming in that the others had, but he certainly made the most of his opportunity at the perfect time,” Steele said. The five rushing touchdowns tied a state championship game record and he piled up 288 yards on just 12 rushing attempts.

After West’s first touchdown on a 53 yard run to make the score 14-7, Southern had two chances to tie the game. Who knows what could have happened if they did. “Yeah there were just missed opportunities that gave them even more momentum than they already had. We get that score and we would of had the momentum or it would have at least balanced it out,” said Young who is one of the Tiger captains. Steel Valley’s defense stuffed Southern on a 4th and goal from the one to stop a golden opportunity for Southern on their first chance to answer. Then after forcing a punt on the next drive, the Tigers had another great chance to score and tie the game, but Hollenbach overthrew a wide-open Hunter Thomas that would have been good for a 45 yard touchdown and a tie on the scoreboard.

Instead, with 3:51 to go in the half, West scored on a five yard run to extend the lead to 21-7. Then on the Tigers next drive, Hollenbach fumbled a handoff intended for Nic Fetterman to give the ball right back to the Ironmen. Ford scored just before the half and they converted on a fake PAT pass from Harper to Murray to make the score 29-7 at the intermission. “I’m proud of our team and the result. Even though I wasn’t fully healthy, there was no way I was missing the game. We have had different guys step up at different points throughout the entire season and another example was in this game,” Murray said.

In the third quarter, West scored on carries of 37 and 60 yards behind the push of his offensive line. “He has been patient all year. I have been telling him all year to just wait for his chance and that he would eventually have a chance for a breakout game,” Hughes said. West’s 60 yard carry was one of the best runs that anyone will ever see. “I was just trying to stay on my feet. I definitely thought that I was going to fall down, but after I reached the end zone I realized that I didn’t and I couldn’t believe it,” said West. Nobody else in the stadium could believe it either.

How good was the run? Well, less than two hours after the game’s conclusion, the run was seen worldwide on ESPN. It made it on to SportsCenter’s Top 10 plays. The touchdown officially put the game into the Mercy Rule with 4:03 remaining in the third quarter. West then added another 60-yard run in the beginning of fourth quarter for the game’s final points in the 49-7 Steel Valley convincing victory to claim the PIAA Class AA State Championship. “They were a great football team and deserve all the credit. I don’t know if our lack of experience played a major role at any point this season until this game,” said Roth. “They executed when they needed to and we didn’t handle the moment the way that we probably could have at different points in the first half.”

Obviously it wasn’t the performance that the Tigers were looking for in the season finale, but most people didn’t think it was possible for the Tigers to get back to Hershey this season. After all, they graduated half of their roster and had more freshmen on this year’s squad than they had seniors. Put together all of the parts needed, and the Tigers can be proud of winning a state silver. “Being able to play for Southern was one of the greatest things that has happened to me. The brotherhood and community is just different than at other schools,” Thomas said. “I was so proud to be able to play on Jim Roth Field on Friday nights. It’s an even greater honor to put the black and gold on and make everyone proud including my family,” said the senior captain.

Thomas ends his career as one of the most decorated running backs in the history of Southern Columbia. He finished 5th on the all-time rushing list with 3,824 yards unofficially. He will also graduate with the most catches ever by a running back in school history. He finished with 63 catches over the course of his illustrious career. Young, who also played his final game as a Tiger, finished with 17 career interceptions which is the top spot on the school’s list including the eight he had this year.

Running back Gaige Garcia, although missing the state championship with a broken ankle, broke the state record for most rushing yards in a season by a freshman. His 1,938 yards and Thomas’ 1,536 yards marked the first time in school history that two Tigers have hit the 1,500-yard plateau in the same season. Fleming, who’s another member of the freshman class, is just two touchdown catches away already from breaking the career record. He had 13 during his rookie year. Freshman linebacker Cal Haladay finished just one tackle shy of the single-season school record of 147 according to the official statistician at the stadium. Also returning next season are Teagan Wilk, Anthony Scicchitano, and Tom Manley, and that trio combined for nearly 300 tackles. The sophomore quarterback, Hollenbach, broke all but one of the single season passing records. He set the Tiger record for passing yards in a season with 2,160 unofficially and touchdown passes with 23. The only record he didn’t set was completions as he fell one completion shy of matching Brad Fegley’s record of 111.

The Tigers will most likely start the 2017 season as the top-ranked team in the state with the amount of talent that returns. They will also try to start to put together a new winning streak. “The loss puts things into perspective as to how much harder we will have to train in order to not only get back to this game next year but win it as well,” said Garcia who was in street clothes with a boot on his broken ankle. “We will use this game as our motivation over the course of the next year to ensure that if we are given the opportunity again next year, the outcome will be much different,” he said. Although the Tigers will head into next season riding a current 51-game regular season winning streak, they will try to put together a new overall winning streak as their streak was snapped at 31 games. That streak was just one win shy of matching the school record set in the mid-1990’s. “Hopefully this result will get the underclassmen hungry heading into next season. I know that they will want to work hard to try and get back to Hershey and reclaim the gold,” said Roth who will enter next season just four wins shy of becoming the fourth coach in Pennsylvania history to reach 400 wins.