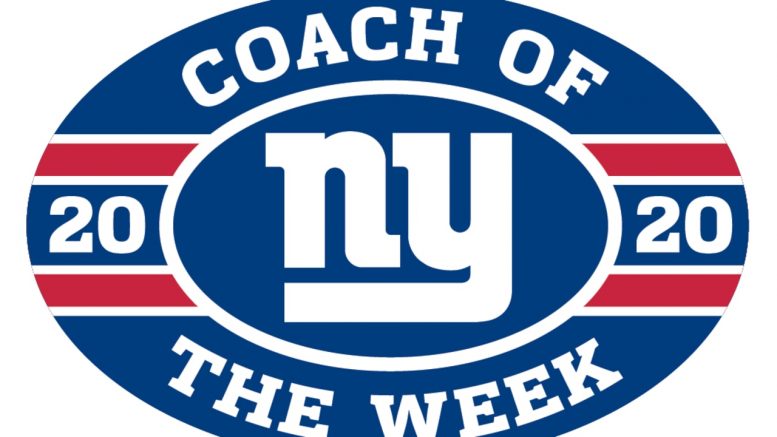 The following story is from Giants.com

East Rutherford, NJ – The New York Giants and Gatorade have selected Mr. Steve DiGregorio of Nutley High School (Nutley, NJ) as the Lou Rettino High School Coach of the Week for Week 4 of the 2020 season. Coach Steve DiGregorio, a Nutley native, is in his 12th season as Head Coach of the Nutley Raiders. In 2017, DiGregorio started his battle with cancer, which caused him to have to miss the 2019 season as he began six months of chemotherapy.  Throughout that time his community rallied around him and provided the support he needed to get back on the sideline with his team. DiGregorio has returned as head coach of the Raiders this season and the Raiders defeated West Side (Newark, NJ) on the road 31-18 to start the season.

In recognition of Coach DiGregorio’s selection as Coach of the Week, a $2,000 check will be granted to the school’s football program from The Giants Foundation and Gatorade. He will also receive a certificate of recognition signed by NFL Commissioner Roger Goodell and Giants head coach Joe Judge.

Coach Steve DiGregorio was born and raised in Nutley and graduated in 1979. After playing football for 4 years at Nutley High School, he continued his football career at Muhlenberg college where he graduated in 1983. He served as an assistant coach from 1987-1999 at Princeton University where he coached athletes like Keith Elias and Giants offensive coordinator Jason Garrett.  In 2004, DiGregorio returned to Nutley High for 8 seasons where he served as an educator and head football coach. In 2011, he stepped down as head coach for the opportunity to coach his sons at Princeton High School and became a volunteer assistant coach. In 2017, DiGregorio came back to Nutley but his cancer and chemotherapy caused him to miss the 2019 season. With DiGregorio not on the sideline, the Raiders made sure to have him there in spirit. Nutley High finished the regular season with a 5-4 record and earned a spot in the playoffs by winning their final three games. During that win streak, they defeated Lincoln High, 27-7, for a big win and named it “Coach D Day” after DiGregorio. To honor the dedication and hard work of DiGregorio, the Townships Commissioner proclaimed October 19th, 2019 as “Coach D Day” in Nutley. DiGregorio has now returned to the sideline as head coach and started the 2020 season off with a win. While his battle with cancer had kept him away from the football field, he attributes the success of his fight to his faith, family, friends and the Nutley community and looks forward to leading his team for seasons to come. He is especially appreciative of the love and support of his wife Nadia, and their three sons, Zack, Derek and Aaron.

DiGregorio commented ” I am grateful to be Nutley High School’s head football coach and have such a great group of kids to coach. They are terrific. I’m also grateful for having such a talented and committed staff who work to give their best to our kids. I want to give my heartfelt thanks to the Nutley community as well as the school district’s community who stood by and supported my family and me after I was diagnosed last year. Nutley has always been a place of great character and values with a strong sense of community. I am a direct beneficiary of the Maroon Raider tradition that we continue to instill into the kids of our football program.”