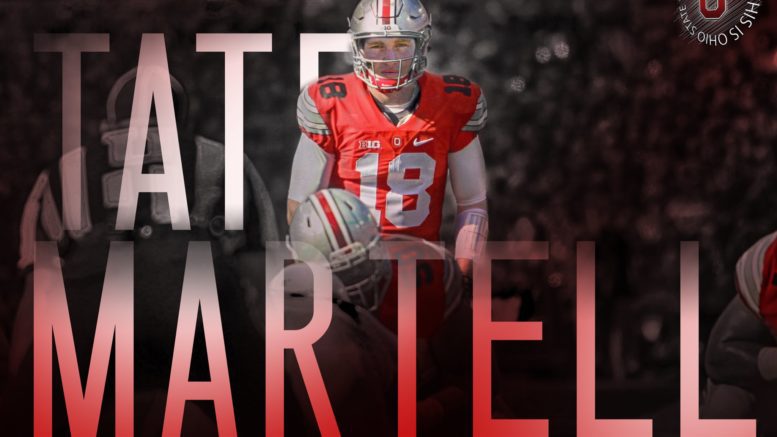 It’s been interesting to watch Bishop Gorman (Nevada) quarterback Tate Martell become Ohio State‘s “head recruiter” over the last 10 days or so.  Yes, while Urban Meyer, who is only one of three coaches to win national championships at two different universities, has made a great career out of attracting top talent to the four schools (Bowling Green, Florida, Ohio State and Utah) he’s coached at, it looks like his future QB has a talent for helping Meyer bring new talent to Columbus.

My tongue-and-cheek comment on Martell, who verbally committed to the Buckeyes in the middle of the month, becoming Ohio State’s “head recruiter” is based on his very active Twitter account, which has been cranking-out tweets aimed at getting top Class of 2017 prospects to join him in the Buckeye State.  The latest being 5-star prospect Wyatt Davis of St. John Bosco (California), who Friday gave his verbal to the 2014 national champs.

Below is a sample of Martell’s recruiting handiwork via Twitter:

Hopefully I’ll be able to put a ✔️ on my white board next to Wyatt Davis name after tomorrow! #GoBucks @wyattdavis53 pic.twitter.com/X6ICrSLCOO

Trust me… We are nowhere near done yet! #SELECT17 https://t.co/sVX2KmBjtP

Martell, who has led Gorman to back-to-back USA TODAY Super 25 “mythical” national championships, wasn’t done after Davis came on-board. He then turned his attention to tweeting about 4-star offensive tackle Trey Smith of University School of Jackson in Tennessee.

And, Martell isn’t just worried about his offensive, he wants some defense and Saturday turned his attention to the nation’s top safety, Jeff Okudah of South Grand Prairie High School in Texas.

#BuckeyeNation go show @TheJeffOkudah some love!
We need him to be the next
buckeye we add to #SELECT17!

Finally, he’s been tweeting about what right now is considered the best 2017 recruiting class and those still on his wish list.

While I may be joking about Martell being Ohio State’s “head recruiter”, it isn’t a joke that in this day-and-age of social media, that players can be a great help, even to a great coach like Urban Meyer, when it comes to landing the nation’s top high school football talent.