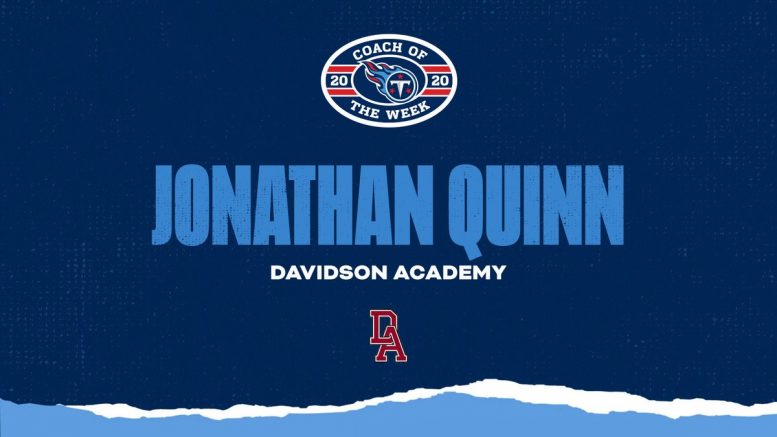 Congratulations to Jonathan Quinn, head coach at Davidson Academy, on being named the Tennessee Titans High School Coach of the Week. Quinn, who was drafted by the Jacksonville Jaguars in 1988, became Davidson’s head coach in 2014. He also played for the Chicago Bears and the Kansas City Chiefs.

Congrats to Coach Jonathan Quinn of Davidson Academy for winning our @Titans HS Coach of the Week Award 🏆 The undefeated Bears are ranked #1 in Division 2 Class A and will be receiving a $1000 donation from the #Titans Foundation 🏈 pic.twitter.com/ZZVRiTtL1X

Davidson Academy, which has won back-to-back Division II state titles in 2018 and 2019, is off to a perfect 7-0 start this year. The Bears are ranked No. 1 in the Associated Press Tennessee Division II Class A statewide rankings.

Quinn’s program will receive a $1,000 donation courtesy of the Titans Foundation, plus he is now in the running for the 2020 Titans’ Coach of the Year Award.