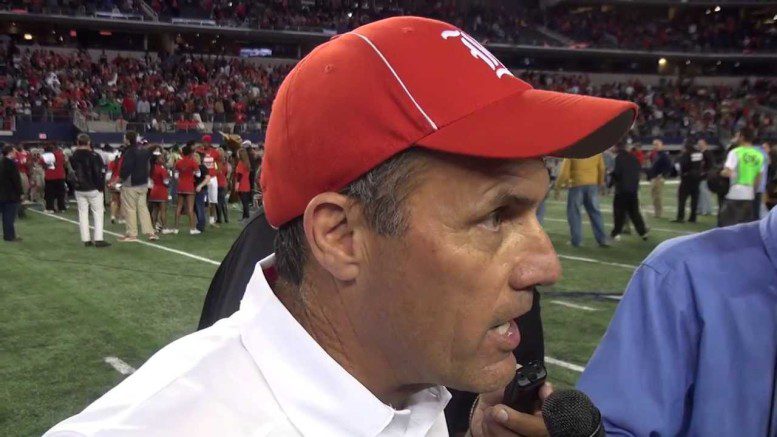 Gary Joseph, who has led Katy to four state championships in a dozen years as the school’s head coach, is the 2015 National High School Coaches Association (NHSCA) National Football Coach of the Year presented by High School Football America.

This past season, Katy steamrolled to a perfect 16-0 mark to win the Texas’ Class 6A Division II title, outscoring its opponents 778-62 with ten shutouts.  The Tigers finished #3 in the High School Football America National Top 25 and were named “mythical” national champs by MaxPreps.com, NationalHSFootball.com and PrepNation.com.

Joseph owns a lifetime mark of 168-14 with eight overall appearances in state championship games.  Joseph has led Katy to 11 district titles and the Tigers haven’t lost a district game since 2008.

Joseph will be honored in the National High School Sports Hall of Fame Museum that the NHSCA will be building in the near future. He is the third Texas coach to win the prestigious honor.  Tom Westerberg of Allen won the award in 2013 and Randy Allen of Highland Park was the winner in 2005.

Since 2000, the NHSCA has selected national coaches of the year in a total of 20 boys’ and girls’ sports.

Joseph will be inducted into the Texas High School Football Hall of Fame in May.