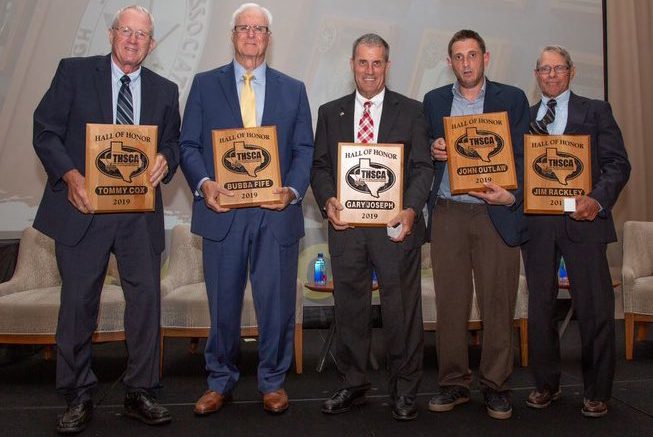 The Class of 2019 inductees into the Texas High School Coaches Association Hall of Honor are among the best high school football coaches to ever grace the sidelines in the Lone Star State.

2016 High School Football America Coach of the Year Gary Joseph of Katy High School was honored along with Tommy Cox, Bubba Fife, Jim Rackley and the late John Outlaw Saturday night at the Marriott Marquis in downtown Houston during the annual THSCA Convention.

Congrats to @Katyfootball Head Coach Gary Joseph on going into the @THSCAcoaches Hall of Honor. Can't wait for the new season to start. @abc13houston @katyisd pic.twitter.com/hErjmlCzRr

Joseph will enter the 2019 season with 201 lifetime wins. He’s led the Tigers, who are ranked No. 49 in the 2019 High School Football America Preseason 100 to four state championships along with 15 playoff appearances and14 district titles.

Outlaw, who died in 2011 at 58 years old, had an incredible career with 308 victories against only 89 defeats with three ties. He led Lufkin to its only state title in 2001. He was also the youngest Arkansas coach to win a state title when he coached at Arkadelphia. He also coached at Sherman High in Texas.

Outlaw’s son Stephen accepted the award in honor of his father.

The Late @Lufkinfootball Coach John Outlaw was inducted into the Hall of Honor at the 2019 @THSCAcoaches Hall of Honor
story: https://t.co/ihyX9ZPmbU pic.twitter.com/9abfLUnMbB

Rackley became the third Judson coach to be inducted into the Hall of Honor. Frankie Arnold was inducted in 2003 and D.W. Rutledge was honored in 2005.

Cox was the head coach at Austin’s Travis High School, his alma mater. He was a three-year starter as the school’s quarterback before going on to play college football at Southwest Texas State.

He coached at Travis and Austin Bowie. After he retired from coaching he became athletic director for the Austin Independent School District.

Congratulations to a fantastic coach and person! Coach Tommy Cox was inducted into the THSCA Hall of Honor last night✨ pic.twitter.com/3goKSwZLAx