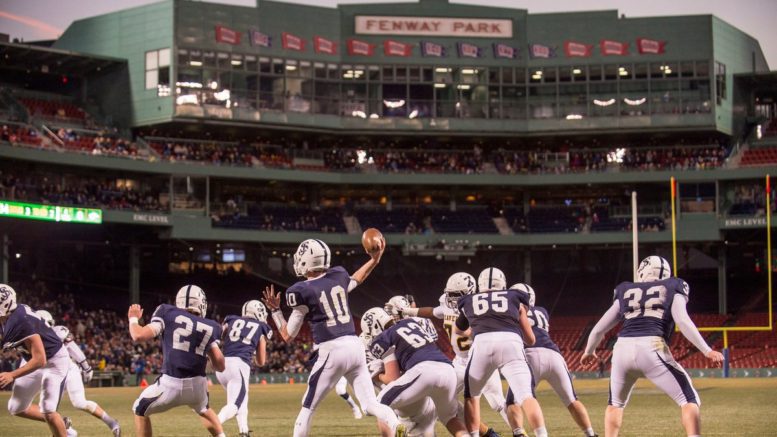 The Boston Red Sox are having one of their best seasons ever in their illustrious history, but once the curtain falls on October baseball, Fenway Park will once again be converted in a football stadium that will host Massachusetts high school football Turkey Day games. The quadruple-header will feature three of the top teams in our Massachusetts Top 10.

Headlining the four-game card is the Thanksgiving Eve matchup between St. John’s Prep and Xaverian. The two are currently ranked No. 2 and No. 3 respectively in the latest High School Football America Massachusetts Top 10.

If Xaverian beats BC High this week, the Turkey Day game will be for the Catholic Conference championship. Xaverian will bring a five-game win streak in the series into this year’s matchup. The two met at Fenway in 2015 with the Hawks winning 14-0.

High School football will make its return to @fenwaypark this fall as we host 8 football teams from the Commonwealth for a series of doubleheaders on Nov. 20-21! Tickets go on sale on Nov. 6 at https://t.co/a4w6M9wzNM pic.twitter.com/pmLVptjFyP

In the nightcap on November 21, Framingham and Natick will meet for the 113th time. Natick owns a 75-32-5 advantage in the series. The Redhawks have won six straight against its arch-rival.

Everything gets started on November 20 with city rivals Burke and West Roxbury going head-to-head. The night cap will be the 72nd Thanksgiving Day game between Mansfield and Foxboro. Manfield, ranked No. 4 in the Massachusetts Top 10, leads the all-time series 35-32-2.

It’s the third time since 2015 that one of baseball’s crown jewels will host high school football teams from the area. There were no high school games played at Fenway in 2016.

When high school football returned to Fenway in 2015, it was the first time since 1935 that the the park hosted scholastic football.  High school games at Fenway were common in the early 20th century, and the park even hosted the high school national championship game in 1912 when Massachusetts’ Everett High School beat Oak Park from Illinois.

The high school Fenway football tickets will go on sale shortly at redsox.com/hsfootball. Tickets are priced at $20 with 25 percent of every ticket sold being given back to the school each patron is supporting.