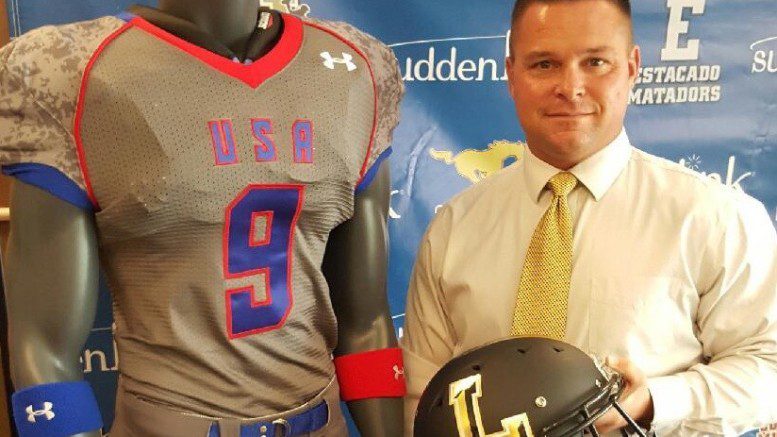 Fourteen years ago today our country experienced an attack that it has never seen before in the homeland.  A cowardice act by terrorists, using airplanes as guided missiles, hit us in the heart.  Our country staggered for a bit but we never collapsed.  It is not the American way to give in.  Fourteen years later we are still gong strong.

Tonight, my Lubbock High Westerners will take the field wearing the best colors in the world: red, white and blue. We are dedicating this game to those who lost their lives on 9/11.  I cannot think of better way to honor the events of 9/11 then to wear our country’s colors on a Friday night here in Texas.

This has a special meaning to me. I am honored to be wearing the red, white and blue tonight.  It’s powerful.  It’s special.  It’s American.

THE UNIFORMS
My boss, Mark Ball, really pulled this off with Under Armour.  Brand new uniforms, specially designed to represent our country.  They are done with class, prestige and pride.

Cardinal’s Sports, here in Lubbock, played a huge part in getting this done, as well.  Daniel Walker, a close personal friend of mine and our team rep for Cardinal’s, designed this uniform.  He knocked it out of the park like he usually does.

Coach Ball had been working on this for roughly three years.  These uniforms can be worn once a year to honor 9/11, military personnel etc.  It is a tremendous way to honor the best of the U. S. A.

On s personal level, it is such a huge honor for Coach Ball to choose the Westerners to wear these first.  As most of you know, I grew up near NYC.  The events of that day struck fear in my heart.  Being so close to New York City, we were all wondering we were going to die — it is something that I have never forgotten.  It was scary!

Fourteen years later I find myself in Lubbock, Texas honoring the events of 9/11.  I wouldn’t have it any other way.  I am very thankful to work for a man like Coach Ball.  He gets it.  He is what our country is all about!

THE RED BANDANA
Earlier this week, I told my team that if we are going to wear these uniforms, they better understand why we are wearing them.  This is not a fashion statement.  This is not to look cool. This is to dedicate, reflect and pay respect to our country and the victims.

All week long I shared a story with the team about 9/11.  I wanted them to understand the “why” behind this.  I couldn’t think of a more powerful story to share with them than the story of “The Man in the Red Bandana”.

Welles Crowther was a former Division I athlete to always carried a red bandana with him. The red bandana was something he had always worn or had with him since his childhood.  He had it with him on 9/11 while working in the south tower.

After the tower was struck by the second plane, Crowther spent the last hour of his life saving at least a dozen lives.  He led people to the stairwell and then went back up to save others…never heading down the stairs to save his own life.

In October of 2001 Welles was found in the rubble of the south tower, where the lobby would have been. He was found next to NYC firefighters.

Welles lost his life on 9/11 rescuing others.

The Man in the Red Bandana was a hero.  Our team watched the video produced by ESPN and became so moved that they decided to
wear red bandanas tonight in honor of Welles Crowther.

The Westerners get it. I knew they would.