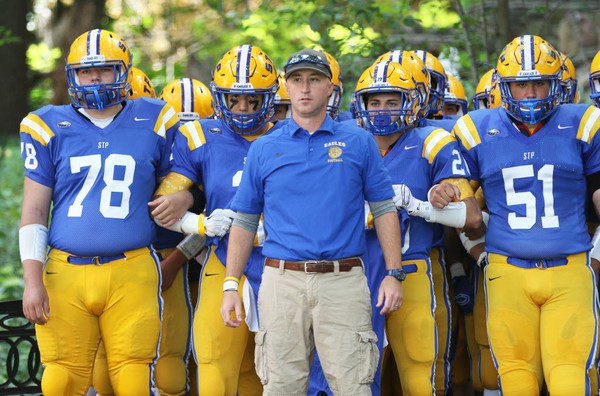 Welcome to my “Fantasy World” where NYC high school football is exciting, relevant and covered with some degree of intelligence. But the most important thing is that a NYC champion would be declared.

The entire premise of my NYC Opinion Top 5 is to create debate about the need, at this point, for a Metro Bowl. The PSAL Champ vs. the NYC (5 Boroughs) CHSFL team that advances farthest in the Catholic playoffs.

With this in mind, I view my Top 5 in the fictional realm of “what if”…much like the college football playoffs.  Four teams with vastly different reasons for being in the top four selected by a committee that is strongly influenced by other polls. The committee makes considerations such as conference, division, strength of schedule, quality wins, quality road losses, and doesn’t just select the teams by who is undefeated.

Having said that… a poll that excludes any Catholic Team from a NYC Top 4 based on losses to teams outside of the 5 Boroughs is simply incorrect and unfair. In the fictional world where four teams would battle to be the NYC Champion. And, not one of them be Monsignor Farrell or Cardinal Hayes is comical. At this point, I have to reiterate that:

With that being said I’m going to break my own rules here and adjust my Top 5.

The Vikings held off the defending champion Curtis Warriors and my Upset of the Week pick to remain undefeated and take over my No. 1 spot. Curtis, in addition to high quality wins over E Hall and Tottenville, has South Shore controlling its own destiny. At this point is where the strength of schedule in the PSAL rears its ugly head. In the remaining month of the season the Vikings will have a total of one competitive game — Lincoln, the last week of the season. With the exception of rest…Flushing, Brooklyn Tech, and bye week, the first week of the playoffs will do very little to prepare the Vikings for the playoff run. QB Darius Thompson is my early vote for Player of the Year in NYC. Let me reiterate that I think the Vikings would lose to Farrell or Hayes.

Farrell is still the team I think would win the NYC FBP. I saw them against Curtis in a scrimmage and their special teams would beat up on South Shore. They play a different brand of football, but the loss to Stepinac was not competitive. Stats are one thing, but without a blocked punt they would have lost to Hayes. Hayes hasn’t turned out to be the juggernaut that I expected.  Even if their defense did a great job, their offense simply doesn’t move the ball. South Shore’s defensive front and 1-on-1 cover guys would give the Lions fits, but if Thompson got rolling, the Lions offense would not keep up.  Farrell is NOT going to win the title in the NYCHSFL this year, but none of the PSAL teams are at the 4A level. To say they aren’t a NYC top 5 team is not fair. Farrell will roll through Fordham Prep this week and then here come the Friars of St. Anthony’s. It’s going to come down to the first round playoff opponent to determine if the Lions can reach the semifinals for only the second time in fourteen seasons. None of this means they wouldn’t be undefeated in the PSAL.

The Pirates are a very tough team to gauge. Seeing them in-person, they looked like the better team than South Shore at several points of that game. However, the Pirates schedule has been tremendously light to this point with only one quality win vs. Lincoln in Game 1. Tottenville has two huge games in the last three weeks to determine the outcome of this season. Curtis this week and Erasmus Hall in two weeks will answer all of the questions I have about the Pirates. I still believe that they would beat South Shore in a rematch, but wouldn’t beat Hayes or Farrell in the NYC FBP. Right now they deserve to be the home team over Hayes.

Hayes has played four games and lost three. Their lone win is over a talented Christ the King team that happens to be 1 – 5. Hayes started off as the preseason No. 1 in NYC, having won every single 7-on-7 tournament in the area. However, it’s time for that potential to pay off. A disappointing blow out loss out at St. Anthonys last Friday tells me that this edition of the Cardinals has pulled back into the AAA level and I don’t see them winning a title this year. Again, it doesn’t mean they wouldn’t be undefeated in the PSAL. With Chaminade this week, Hayes should get a chance to get something positive going into hosting Stepinac to conclude the season. We all know that Hayes can turn it on at any time, but as a note to Hayes…….NOW is the time.

The Dutchmen have one loss and that loss is to the No. 1 team, South Shore.  At some point, I had to move Christ the King out of the top 5. The always talented Dutchmen have quality wins over Curtis and Midwood, and end the season with games against Lincoln and Tottenville that will make a difference. It looks like the Tottenville / E Hall game to end the season will determine who gets the final spot in my NYC FBP. I also assume that the Dutchmen are the team most opponents would least like to draw in the PSAL playoffs before the title game at Yankee Stadium….making that No. 1 seed for South Shore more important than ever.