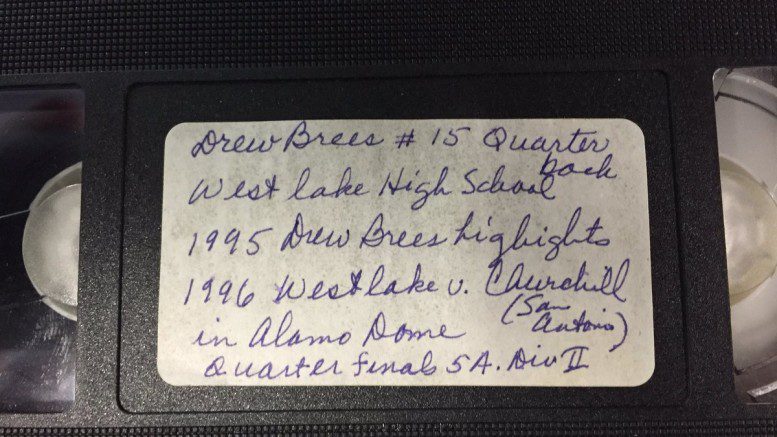 For those of you much younger than me, check-out a tweet about a “football dinosaur”.  In a day-and-age of digital highlight tapes, some of you may have heard of a VHS tape, but today comes proof that this is the way that high school football players used to try to attract attention.

Parker Dilley, who according to his Twitter account is a student at the University of Iowa working with the Hawkeyes’ video team, found Drew Brees‘ recruiting tape.

Look what we found today in the @hawkeyeFBvideo office @drewbrees pic.twitter.com/sv3BUegwrl

Brees, who played at Westlake High School in Austin, Texas, was lightly recruited out of high school.  While Rivals.com didn’t begin until 1998, it’s likely that Brees, who led his school to a state title in his senior year in 1996 eventually went on to star at Purdue and now in the NFL, would have received many stars under today’s 5-star recruiting rating service system.

Now that Brees is only the fourth NFL QB to throw for more than 60,000 yards, who knows how long it will be before rating systems become a “football dinosaur”?

As one who doesn’t like what the rating services have done to the sport, we can only hope that could happen.