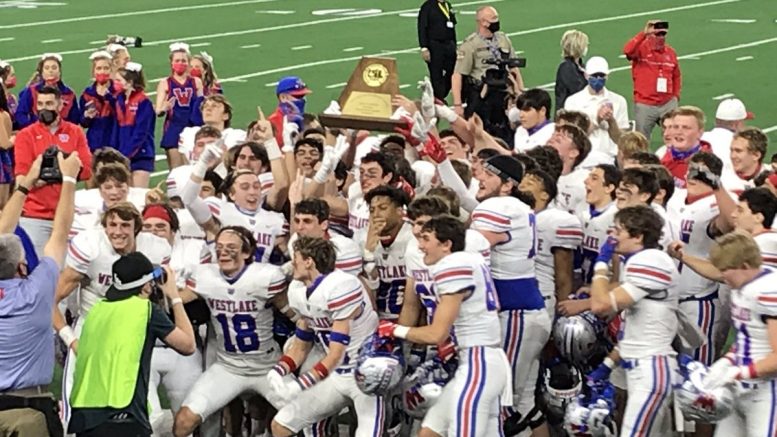 Westlake head coach Todd Dodge has family bragging rights, at least until the coming Fall, after his football program bested Southlake Carroll, which is led by his son Riley Dodge, Saturday night for the Texas 6A Division I state championship. The Chaps, who won last year’s 6A Division II title, beat the Dragons 52-34 for the school’s second straight state title.

For most of the first half, the game, which was dubbed the Dodge Bowl, the two teams traded touchdowns, leading to a 28-21 halftime lead by Westlake, which entered the game ranked No. 4 in the High School Football America 100 national rankings.

After the two were tied at 21-21, Westlake reeled-off 31 straight unanswered points. Chaps’ QB Cade Klubnik was named the game’s Offensive MVP going 18 for 20 in the passing department for 220 yards and a score. He also ran for 111 yards and two scores.

Westlake finishes a perfect 14-0, while Southlake Carroll ends with a 12-2 mark.

"I just can't tell you how proud I am of them."