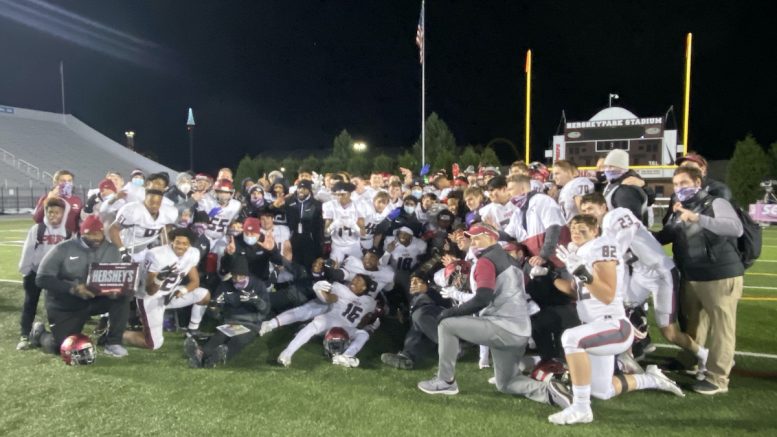 The seniors on this historic St. Joe’s Prep team were on a quest to do something no other PIAA large school had done in over 20 years: Threepeat.

Add in a team filled with angst over having games cancelled and stymied by the chance to prove just good they are and the Hawks were a squad about to explode.

That they did on Central York, 62-13, on Saturday night at Hersheypark Stadium to become the first threepeat Pennsylvania large school state champion since the legendary Central Bucks West teams (1997, ’98, and ’99) of late coaching icon Mike Pettine.

The Hawks, ranked No. 3 nationally by USA Today and MaxPreps, won their sixth state championship, their fourth in five seasons, and their sixth overall in eight years.

“Since March, when this whole thing got shut down (due to the COVID-19 pandemic), I told the guys how hard it was being separated from your family,” Roken said. “I told the guys this morning about the sacrifices this program made, especially for the seniors. This group of seniors and this coaching staff, I’m grateful for them.

“It was frustrating. Cardinal O’Hara was amazing to us this week, allowing us to practice there. We were all over the place, but this is bittersweet, saying goodbye to a special group of seniors. They did things that haven’t been done in a while, and may never be done again.”

Temple-bound Prep senior receiver Malik Cooper was a one-man wrecking crew. He caught five passes for 114 yards and a touchdown, returned a punt for a score and threw a 55-yard touchdown pass, while Ohio State-bound Marvin Harrison Jr., the son of Hall of Famer Marvin Harrison, hauled in three passes for 73 yards and two touchdowns.

The goal for everyone wearing maroon and grey was to threepeat.

“It meant a lot to threepeat and we predicted this would happen before the season started,” Cooper said. “After our freshmen year, the seniors promised that we should never lose again. I think I’ll remember how much and how hard this group worked.

Prep bolted out to a 24-0 lead and were never threatened. The Hawks’ defense hindered almost everything Central York Penn State-bound quarterback Beau Pribula tried. He finished completing 19 of 38, for 163 yards and a touchdown, with two interceptions.

There was one sequence when Pribula tried stopping Cooper on a 47-yard punt return for a third-quarter touchdown and was terribly deked out, left grasping at nothing but air. In frustration, the 6-foot-3 junior slammed his helmet on the Hersheypark Stadium turf when he returned to the Panthers’ sideline.

“We had games cancelled, we had things delayed, we had to constantly move practices around because we weren’t allowed to practice in the city, and there was a whole lot of different challenges we never faced,” McCord said. “But we came out of it with this (state championship). We have something that I’ll always remember, because of the guys I did it with, from the staff, to each player on this team.”

Joseph Santoliquito is an award-winning sportswriter who has been covering high school football since 1992 and is the president of the Boxing Writers Association of America. He can be followed on twitter @JSantoliquito. Follow EasternPAFootball.com on Twitter @EPAFootball.

Pennsylvania still moving forward with Fall sports in the Fall, but…