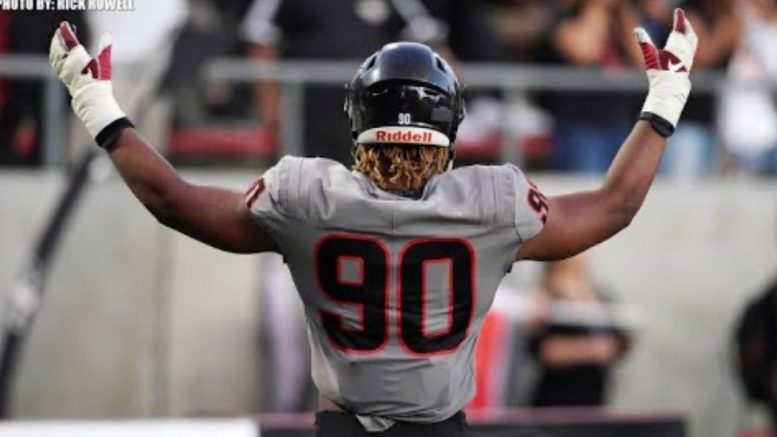 Why is Ohio State ranked No. 1 in the recruiting wars for the Class of 2021?

Just take a look at the top high school football defensive linemen and you’ll see why. The Buckeyes own verbal commitments from three of the top eleven recruits, according to the 247sports.com composite rankings.

Ohio State head coach Ryan Day has gotten verbals from in-state players Jack Sawyer, No. 3 in the rankings, of Pickerington North and No. 11 Mike Hall of Streetsboro. No. 7 Tunmise Adeleye of IMG Academy (Florida) has said yes to Coach Day.

The top-ranked guy up-front on the defense is Korey Foreman, a strong-side defensive end from California’s Corona Centennial. Foreman, de-committed from Clemson earlier this year, had five sacks last year. On Wednesday, he tweeted his top seven schools.

I am a young black man that is happy and proud of my race. The Black Lives Matter movement is and forever will be powerful and definitely never forgotten. These are the schools I will now be focusing on the most. Set the standard and

The nation’s No. 1 overall player, @koreyforeman54, was back on the field today at a camp in California.

Check out these clips of him in action from @RyanYoungRivals

Out of the State of Washington, Eastside Catholic’s J.T. Tuimoloau is the No. 2 ranked defensive lineman. Ohio State is also in the running for Tuimoloau’s talents

Damon Payne of Belleville High in Michigan is expected to head south when he announces his college decision. Many expect him to end-up at the University of Alabama.

Maason Smith of Terrebonne in Louisiana is ranked No. 5. On the 4th of July he announced his Top 8 — Georgia, LSU, Florida, Oregon, Alabama, Miami, Oklahoma and USC.

Top Offensive Players from Class of ’21