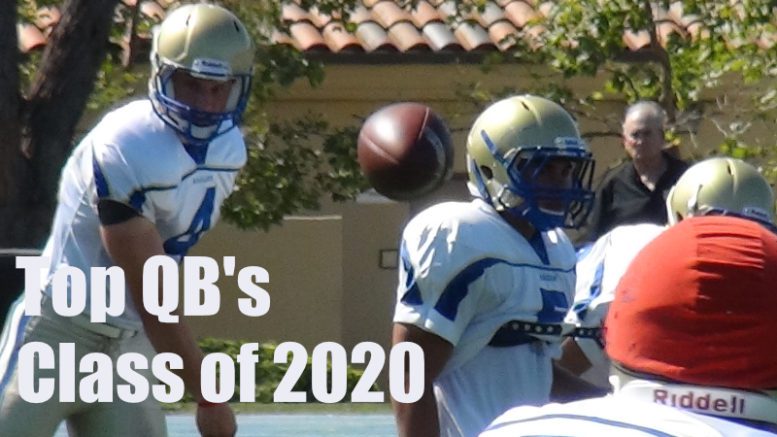 A couple of days after Rancho Cucamonga (California) quarterback CJ Stroud won the Elite 11 quarterback competition, I thought it would be a good time to look at the top QB’s in the Class of 2020, according to the 247sports.com composite rankings prior to the Elite 11 and The Opening at The Star in Frisco, Texas.

247sports.com’s Top 50 quarterbacks include fourteen players whose teams begin the season ranked in our Preseason 100. In fact, the top two — No. 1 D.J. Uiagalelei and No. 2 Bryce Young — are the triggermen for the top two teams in our national rankings.

Young, who has given his verbal to USC), will be looking to lead Mater Dei (Santa Ana, California) to its third straight High School Football America “mythical” national championship. Mater Dei is our Preseason No. 1.

Last year, Young, a 4-star prospect, completed nearly 70-percent of his passes for 3,846 yards with 39 touchdowns and only six interceptions.

Clemson-bound Uiagalelei, who is the country’s only 5-star quarterback, is the leader of No. 2 St. John Bosco (Bellflower, California). In nearly two years as the Braves starter, DJ has thrown for nearly 6,100 yards with 77 touchdowns with only nine picks.

Everyone is looking forward to Round 3 between the two on October 25. Last year, Uiagalelei won the regular season battle between the two national powers, but Young won the CIF Southern Section Division 1 championship game. Look for these two heavyweights to meet twice again this year.

At No. 3 in the 247sports.com composite rankings is Hudson Card of Lake Travis (Austin, Texas), the alma mater of Cleveland Browns QB Baker Mayfield. Card, a Texas-recruit, threw for over 3,500 yards last year with 50 touchdowns and only four picks for the Cavaliers who start the season ranked No. 41 in our Preseason 100. Card ran for over 600 yards last season with nine scores.

Sitting at No. 4 is Jack Miller of Chaparral (Scottsdale, Arizona), who has given his verbal commitment to Ohio State. Due to an injury, Miller only played eight games last year, but he still put up big numbers completing 141 of 256 passes for 2,431 yards with 27 TD’s and six interceptions.

Chaparral is listed in the High School Football America Preseason 100 Honorable Mention list, which features teams ranked nationally between No. 126 and No. 250.

Longview (Texas) quarterback Haynes King, who is uncommitted, is the No. 5 overall quarterback prospect. This will be his third year as the Lobos starter. He’s thrown for over 5,500 yards with 62 touchdowns and only seven interceptions. He’s also run for 886 yards in two years with ten touchdowns. Longview is ranked No. 45 in the HSFA Preseason 100.

Below are the 247sports.com composite ranking QB’s who are on teams in the High School Football America Preseason National Rankings.