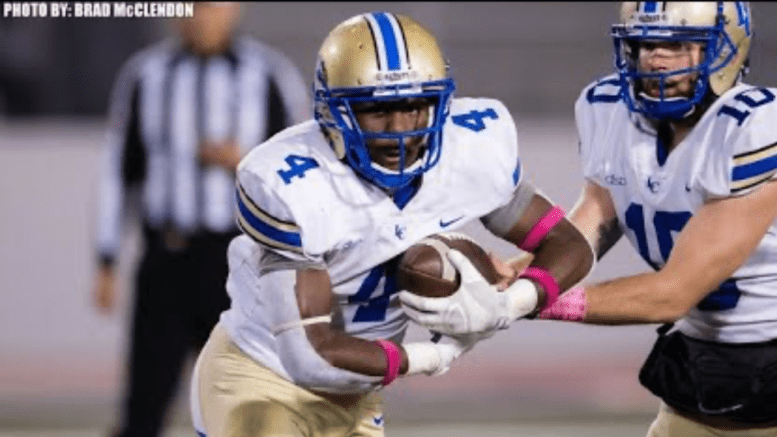 You could call Texas the Land of High School Running Backs heading into the 2020 high school football season. Six of the Top 25 running backs in the Class of 2021 hail from the Lone Star State, according to 247Sports.com’s composite rankings.

Heading the list is Lakeview Centennial’s Camar Wheaton. The 5-star speedster still hasn’t made-up his mind about where he’ll play his college ball.

In his first three years of varsity action, Wheaton has rushed for over 3,000 yards with 40 touchdowns.

The other top-ranked running backs from Texas are: No. 4 LJ Johnson from Cy-Fair, No. 16 Ahmonte Watkins of Klein Forest, No. 19 Brandon Campbell of the Katy Tigers, No. 23 Cam’Ron Valdez of Rockdale High and No. 24 Jordan Jenkins of Lindale.

At No. 4 Johnson, Johnson topped 1,000 yards during his sophomore season. Last year, he nearly reached 2,000 yards on the ground while averaging 9.5 yards per carry with 37 touchdowns.

Coming in at No. 2 in the composite rankings is TreVeyon Henderson of Hopewell High School in Virginia. Henderson is a 5-star back who’s given his verbal to Ohio State.

As a freshman and sophomore, Henderson was a wide receiver and defensive back. He moved to running back last year, rushing for nearly 2,500 yards with 45 touchdowns. In addition, he averaged 40 yards per kickoff return and he was named Gatorade’s Virginia State Player of the Year.

The No. 3 running back is Donovan Edwards of West Bloomfield in Michigan. Edwards has 4.4 speed.

Joining Wheaton in the Ohio State backfield is Evan Pryor of Hough High School in North Carolina. Pryor, the No. 5 running back in the composite rankings, is a do-it-all back — rushing for 1,130 yards last year with 38 receptions for over 600 yards in 2019. He ran for 11 touchdowns and caught eight passes for scores.

The top junior-to-be running back is Raleek Brown of Mater Dei in California. Brown is a transfer from Edison (Huntington Beach, California) where he ran for nearly 2,700 during his first two seasons.

On Sunday, we’ll look at the nation’s top All-Purpose Backs led by Will Shipley of Weddington in North Carolina.