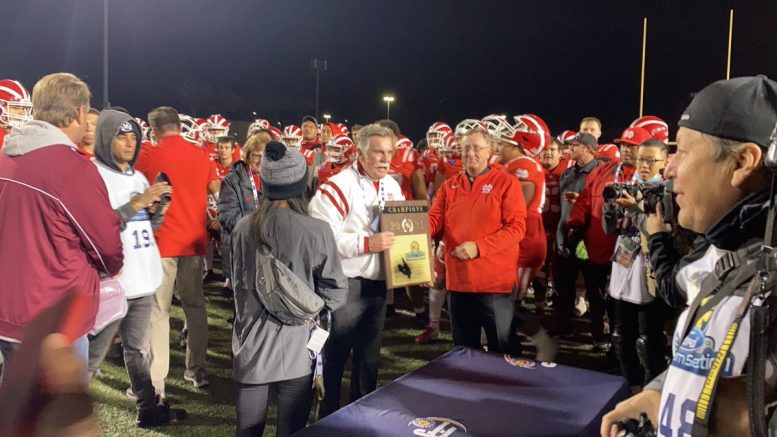 Mater Dei is now one win away from capturing its third High School Football America national championship in five years.

Friday night, the Monarchs, ranked No. 1 in the High School Football America 100 powered by NFL Play Football, beat No. 6 Servite 27-7 for the CIF-Southern Section Division 1 championship. The win sends MD into California’s Open Division state championship game against either a northern team that will be chosen by California Interscholastic Federation’s 10 commissioners on Sunday. Right now, No. 53 De La Salle and No. 100 Serra (San Mateo) are considered the favorites.

Like last week’s win over Corona Centennial, Mater Dei used a strong ground game to win the school’s third sectional title since 2017. The ’17 and 2018 section champs went-on to win the HSFA national championship.

Servite got out to 7-0 1st quarter lead after a turnover on the first play of the game, but after that, the Monarchs’ running game and defense took over. Quincy Craig’s touchdown run tied it at 7-7. Ajon Bryant’s 27-yard TD run gave Mater Dei a lead it wouldn’t give-up.

Raleek Brown had a big game. The Oklahoma-recruit carried the ball 24-times for 162 yards and a touchdown.