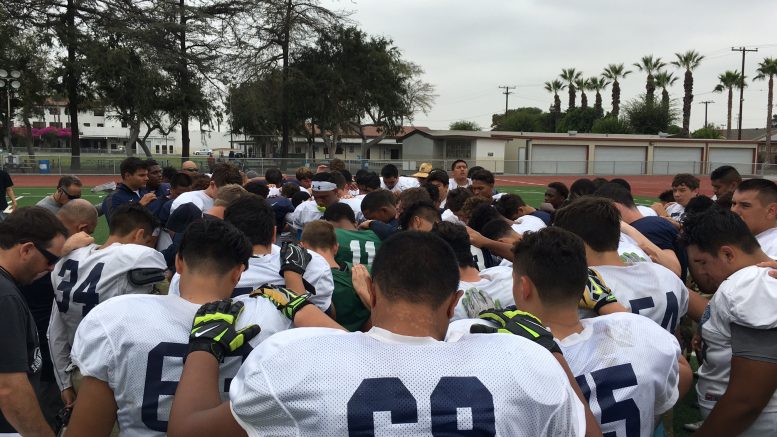 After watching St. Thomas Aquinas (Florida), the #1 team in the USA TODAY Super 25 and MaxPreps’ Xcellent 25, go on the road Friday night and lose to Booker T. Washington in Miami, you know that anything is possible when you head into enemy territory against a quality opponent.  Later today on national television, our #1 team, St. John Bosco (California) will travel a long way across America to Ohio face St. Xavier, one of the top teams year-in and year-out in the Buckeye State.

Bosco returns a half dozen starters on each side of the ball, including 5-star offensive lineman Wyatt Davis, who after graduating, will call Ohio his home over the next four or five years.  Earlier this year, the highly sought-after lineman gave his verbal commitment to Urban Meyer and Ohio State.

Davis is expected to lead the Braves’ offensive line that head coach Jason Negro told me during his interview on the High School Football America Radio Show could be one of his best.  Earlier this month during fall camp, I spoke (see below) to Davis about what he and his teammates were working-on for the 2016 season, plus becoming a team leader in the footsteps of former teammates and current UCLA quarterback Josh Rosen and running back Sean McGrew, who is now at Washington.

Today’s game could be the tale of two quarterbacks.  St. John Bosco will be starting junior Re-Al Mitchell, who will be making his first start. On the other hand, St. X is led by Sean Clifford, an Elite 11 quarterback, who has given his verbal to Penn State.

Last year, in the Braves loss to Corona Centennial in the CIF Southern Section PAC-5 finals, the speedy Mitchell came-in after Quentin Davis went-down with a shoulder injury and tossed two TD passes and ran for another. Clifford threw for over 1,700 yards and 12 touchdowns last year when the Bombers went 7-5, advancing to the Ohio Division I playoffs for the seventh consecutive season under head coach Steve Specht.

Like Bosco, St. X has a star lineman in Matt Brockhorst, who has given his verbal to Clemson.

As for taking a long road trip that plays in a time zone three hours ahead of the Bosco, Coach Negro only has to draw on the experience from last season when the Braves went to New Jersey and whipped two-time defending state champ St. Peter’s Prep 56-14.

It’s also not all football when Bosco hits the road.  The Braves did plenty on this trip, including checking-out the Cincinnati Bengals at practice.

Bosco Staff with one of the NFL’s elite coaches. Thanks to Marvin Lewis and the entire Bengals organization. pic.twitter.com/gG4Suo3C52

Polynesian Pride!!! Bengal great Rey Maualuga. Inspiration to all our players. Thanks for the photo! pic.twitter.com/hu3903QugR

You can watch today’s game at 5 P.M. Eastern on ESPNU