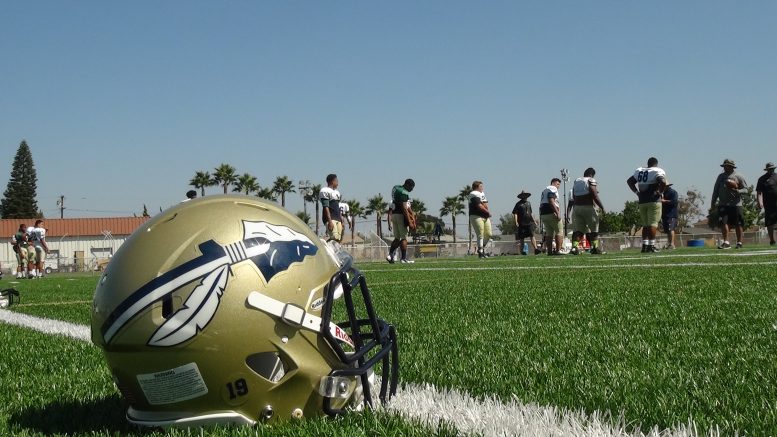 St. John Bosco quarterback Re-al Mitchell knows a thing-or-two about hitting the road for a big game.  In last year’s season opener, the Iowa State-recruit got the Braves off-and-flying with a 98-yard touchdown run on the second play from scrimmage against eventually Ohio Division I state champ St. Xavier.  That set the tone for Bosco, which never looked back in a 34-0 victory on national television in Cincinnati.

Friday night, Mitchell and the defending California Open Division champs will square-off with Florida-power St. Thomas Aquinas, which will be looking for its fourth straight state championship in 2017.  The game will air LIVE at 7 P.M. Eastern Time on ESPNU.

St. John Bosco has been in Florida since Tuesday morning.  The Braves held a full practice Monday in Bellflower, California and then hopped-on a red-eye flight Monday night and hit the practice field in Florida early on Tuesday.

I spoke with Mitchell on Sunday, who was excited about the team’s first of two trips across the country this year.  On September 23, the Braves will head to Washington, D.C. for a match-up with St. John’s College High School.

“We’re very fortunate to have an opportunity like this to play a great team,” said Mitchell, who competed at the Elite 11 finals in Los Angeles earlier this year.

Mitchell is coming-off a strong 2016 that saw him get better-and-better as the season wore on.  He finished with 2,932 yards passing and 1,058 rushing.  He completed over 67-percent of his throws with 30 TDs and only ten interceptions. He also rushed for 15 scores.

Since 2014, Bosco has taken long road trips to Hawaii (St. Louis), New Jersey (St. Peter’s Prep) and Ohio (St. Xavier), coming away a perfect 3-0.  The Braves have also travelled to Portland, Oregon and Las Vegas to play Bishop Gorman.  The only out-of-state road trip loss was to Gorman in 2014.

Despite the loss of Wyatt Davis to graduation and Ohio, Bosco will be strong up-front with the return of three full-time starters from last year’s 13-2 squad.

“Kevin Coblentz (Nevada-recruit) is back at tackle,” said Mitchell. “He’ll give a lot of leadership to the group and we have a lot of depth up-front.”

In the backfield, Mitchell will get help from Arizona State-bound Demetrious Flowers, who ran for 954 yards and 20 touchdowns last year while splitting time at the position.

St. Thomas Aquinas enters the game having played a kickoff classic last Thursday, which is a game that does not count in the Raiders’ 2017 schedule. STA beat Dillard 39-0.

Offensively, the Raiders need to find a replacement for quarterback Jake Allen, who is now at Florida.  Last week, junior Curt Casteel was 9-for-16 for 179 yards and three touchdowns.

Defensively, Aquinas, like Bosco, has an outstanding secondary led by 4-star prospect seniors Al Blades, Jr. and Asante Samuel, Jr.  Blades, who will follow in his father (Al) and uncle’s (Brian) footsteps and play at the University of Miami (Florida), is considered the No. 89 overall prospect in the nation, according to 247Sports’ composite rankings. He’s considered the and the No. 11 cornerback prospect in the nation.

Samuel, Jr. is the son of NFL Pro Bowler Asante Samuel, who won Super Bowls in his first two years with the New England Patriots and also picked-off 51 passes in his career.  The younger Samuel, who has given his verbal to Florida State, is ranked as the No. 98 overall college football prospect in the nation and No. 13 cornerback.

“We had a chance to look at film from Aquinas’ game against Dillard last week,” said Mitchell. “They look real talented, as expected.  It all comes down to execution on our plays.”

Mitchell added “It’s iron sharpens iron in practice. It’s 1’s against 1’s, so it’s really competitive with everyone flying around trying to get better.  We have a really, really good defense and they prepare us for playing against really good defenses.”

The Brave defense that Mitchell was talking about is led by Ohio State-bound Jaiden Woodbey. The senior safety had 70 tackles last year with four interceptions.  Senior safety Stephan Blaylock has committed to UCLA.  Junior defensive back Chris Steele is a good one as well.

No. 11 Northwestern shocked by Norland in South Florida

No. 69 Maryville tops No. 40 Oakland in Tennessee showdown