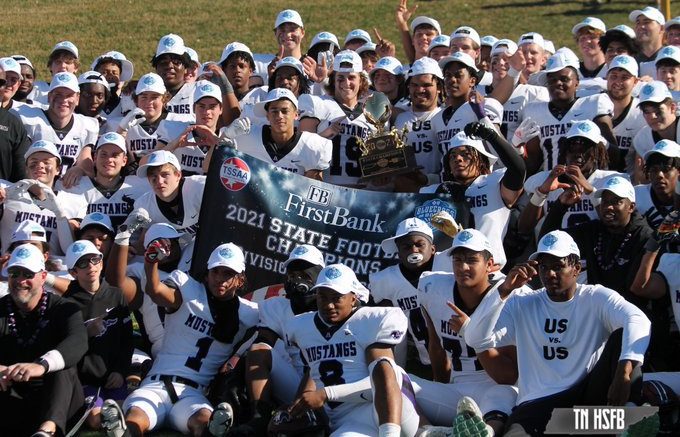 Dilfer, who won a Super Bowl ring as the starting quarterback for the Baltimore Ravens in Super Bowl XXXV, took over the Lipscomb program three years ago. The year prior to his arrival, the Mustangs were 2-9.

Alex Broome takes it in from 4 yards out to extend the Lipscomb Academy lead to 20-0 with 1:50 left in the third quarter. @stateoftnhsfb pic.twitter.com/bzIR8a22Wh

Both teams entered the game ranked in the High School Football America national rankings powered by NFL Play Football. Lipscomb was ranked No. 80. CPA was No. 112 in the nation.

During the regular season, Lipscomb beat CPA 38-0 on October 22.

Lipscomb Academy finishes 2021 with a 13-1 mark. The Mustangs only loss was to No. 9 and defending Division I-6A champ Oakland. CPA ends with an 11-3 record with two losses against Lipscomb and a loss to Oakland.

Lipscomb Academy HC ⁦@DilfersDimes⁩ on his team’s defense, which gave up 10 pts or less in 7 of its last 8 games (including 4 shutouts). Mustangs held CPA to just 223 total yds in Thursday’s 27-0 D-II AA title game win at Finley #bestofpreps pic.twitter.com/1v6H0Qv1Gr