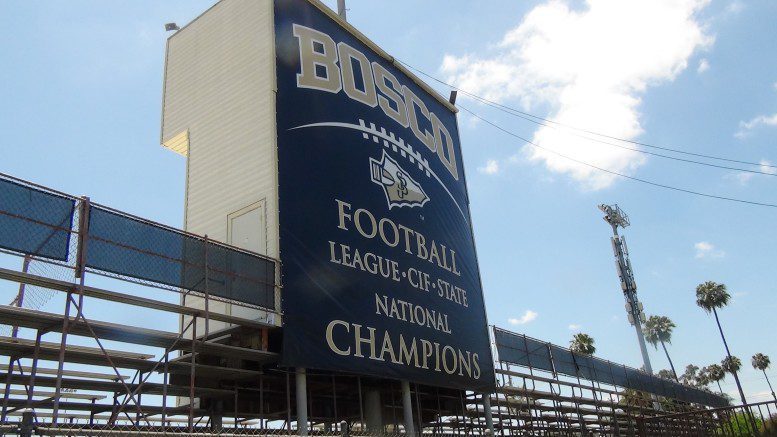 When it comes to looking for a reason for St. John Bosco’s entrance onto the national high school football scene, you don’t have to look any further than the arrival of head coach Jason Negro.

Negro, a St. John Bosco alum from the Class of 1991, became the head coach of the Braves in 2010. Prior to his arrival, SJB hadn’t had a tremendous amount of success in the tough six-team Trinity League that is always listed as one of the top two leagues in the country along with the Big North-United in New Jersey.

Over the last three seasons, Bosco has won three straight Trinity League titles without losing a game. Heading into 2015, Negro’s program has won 16 straight in the Trinity League.

Last year, it looked like Bosco and De La Salle would meet in a rematch, but the Braves lost to a very talented Corona Centennial team in the CIF-Southern Section PAC-5 final.   The 12-2 finish netted the Braves a #15 national ranking in our national Top 25, which is based on our proprietary algorithm.

Last year also marked the end of the incredible career of quarterback Josh Rosen, who is now at UCLA. Rosen was the leader of the back-to-back-to-back championships.

“Josh did a great job on the field, but his leadership off the field on campus and in the locker room is going to be hard to replace,” said Negro.

Waiting to take-over the reigns of the offense are four guys that battled over the summer during 7-on-7 passing tournaments. Heading into camp, Negro said that Quentin Davis, a senior, has the edge over three sophomores.

“We have three sophomores on his (Davis) heels,” said Negro. “We’re a program that is constantly talking about competing and just because you have a job to start the season, doesn’t mean you’re going to end it that way. We’re going to put our kids in the best position to win ball games and the best guy to do that is going to be the guy.”

Negro added that he is very happy with Davis’ performance over the summer.  He also said that the senior has done everything he’s been asked.  You can listen to Negro’s comments about Davis and competition with his team this year below.

The three sophomores behind Davis are Jack Alexander, Julian Boyd and Real Mitchell.

Taking the pressure off the quarterback position will be all-state running back Sean McGrew, who’s given his verbal commitment to the University of Washington.

McGrew isn’t big physically at 5-7, 175 pounds, but he’s tough and fast, having finished second in the state in the 100-meter dash as a junior.

“He’s just one of those guys that gets it,” said Negro of McGrew. “So many times these days athletes are focused on themselves and their stats and Sean is completely opposite of that.”

I spoke with McGrew at the start of training camp about what people say to him about his size.  You can listen to his answer below.

Up-front the Braves are big and Negro has heaped some preseason superlatives on his offensive line that has five starters back and features tackles Wyatt Davis and Joe Murphy and senior center Matt Smith.

I spoke to Smith about what the O-line is working on in camp.  You can hear his answer below.

When I spoke to Negro back in early July, he told me that those five averaged 6-3, 322 pounds.

“We may a little too big and will work during fall camp to cut them down,” said Negro. “But, I’m excited. This could be the best group we’ve had…ever.”

So how’s the slimming-down process working-out during camp?  You can listen to Coach Negro’s answer below.

And, while Negro is very excited about his offense, it may be the defense that puts his enthusiasm into over-drive.

The secondary features four kids  that all have Division I offers.

I spoke with safety D.J. Morgan, who given his verbal commitment to Arizona State, about the pressure of living-up to the 2013 team.

“I think these kids are hungry coming off last season,” said Negro. “Our defense took some shots in the media last year and now in 2015 they’re going to have a chance to show what they can do.”

Negro added, “The future is bright and I think the current group is going to put a pretty good run together and that will translate to a pretty successful season for us.”

Once again, Bosco will play a tough non-league schedule to get ready for the week-in and week-out grind of Trinity League play. This year, the Braves will play Central Catholic from Portland, which has won two straight Oregon 6A titles and St. Peter’s Prep from New Jersey. The Marauders have won two straight New Jersey Non-Public Group 4 titles.

“It’s coach speak, but we really do approach things a week at a time,” said Negro.

The trip to Jersey will be a test for teenagers, who will face a five-plus hour flight and losing three-hours with the time change.

“We’re no stranger to travel,” said Negro. “As far as traveling east, I’ve called coaches that have done it — Bob Johnson at Mission Viejo and Justin Alumbaugh at De La Salle. We’ve been planning since January for this trip (New Jersey). We’re going to leave on Tuesday and we don’t play until Saturday, so I think that will give us plenty of time to acclimate to the time change.”

The Braves begin the season ranked #10 in our Top 25 National Rankings, but don’t be surprised that once the season begins and our performance-based algorithm kicks-in, that you’ll see Bosco move higher and get into position for a shot at our “mythical” national championship.