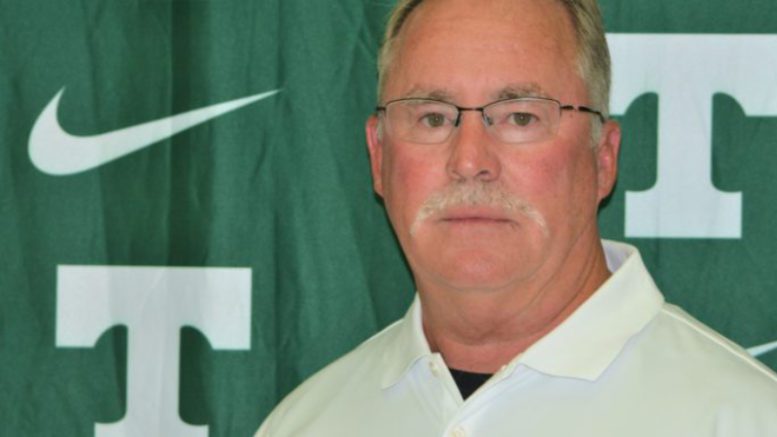 Another year, another state championship and a high national ranking would be the best way to sum-up the 2017 high school football season for Trinity High School in Louisville, Kentucky.  The Shamrocks won their second straight Kentucky Class 6A state title with a perfect 15-0 record and a No. 4 national ranking in the High School Football America Top 100.

Because of the Shamrocks’ outstanding year, Trinity head coach Bob Beatty is our 2017 National Coach of the Year.  The award is presented jointly with the National High School Coaches Association, which has been handing-out Coach of the Year honors in 20 boys’ and girls’ sports for for 19 years.

Coach Beatty has had an incredible career since becoming the head coach at Trinity in 2000, winning 13 Kentucky high school football state championships, including four straight state titles from 2005 through 2008. During a ten-year span from 2001 to 2010, Beatty’s teams captured eight state titles.  Overall, the 2017 state title is the school’s 25th in football.

“We are extremely pleased to honor Coach Beatty,” said Eric Hess, Executive Director of the NHSCA. “Bob has established Trinity as one of the best programs in the nation during his nearly two decades as the school’s head coach. He’s exhibited a strong dedication to supporting and developing high school student-athletes.”

“Coach Beatty has created a level of excellence at Trinity that places the Shamrock program as one of the best in the nation,” said Jeff Fisher, head of the NHSCA Coach of the Year Nominating Committee and founder of High School Football America. “This past year, Trinity, once again, played one of the toughest schedules in the country, which is something the program has been doing for quite a while. He’s won 86.5% of his games, which places him among the all-time greats in high school football.”

Beatty’s overall record at Trinity is 224-35 with four undefeated seasons. Trinity will bring a 30-game win streak into the 2018 season.

Beatty is the first Kentucky high school football coach to receive the honor.

Below are the NHSCA’s past selections for National High School Football Coach of the Year.

High School Football America began teaming-up with the NHSCA for the award in 2013.

Throughout 2018, the NHSCA will be honoring high achievers in the high school coaching community for the 2017-18 school year by naming Coaches of the Year in a total of 20 boys’ and girls’ sports. It’s the 19th straight year that the NHSCA has presented its National Coach of the Year Awards.