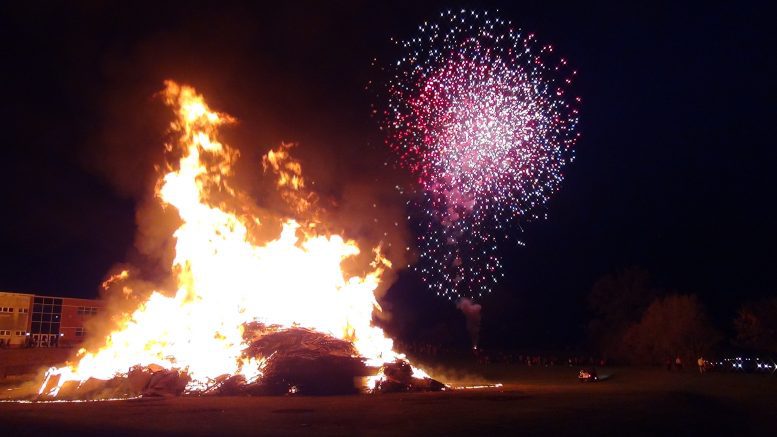 Easton celebrates the eve of its rivalry game against Phillipsburg with a bonfire and fireworks Wednesday night. Hope everyone had a great Thanksgiving full of family and football!!

Crazy day in the kitchen for me yesterday, so I didn’t have a chance to post anything about my favorite high school football day of the year. Nothing, in my mind, beats watching a high school football game on a cool and crisp Thanksgiving morning.Last year, in the snow, Trish Hoffman and I spent the morning creating a video on the Battle of the Delaware River game between Easton (Pennsylvania) and Phillipsburg (New Jersey).  Yesterday, Easton beat P’burg 24-8 before 14,000 fans at Lafayette College.  The Red Rovers victory in game #105 in the series, gives Easton a 59-41-5 lead in the overall series.

Yesterday, also marked the first time in three years that I wasn’t able to watch a Turkey Day tradition, live and in-person.

In 2009, High School Football America visited Connecticut to watch the battle between the two schools that started it all.  Norwich Free Academy and New London (then the New London Bulkeley Tigers) played America’s first-ever high school football game on May 12, 1875; yesterday was the 150th meeting between the two.

Yesterday, Stonington (Connecticut) and Westerly (Rhode Island) met for the 100th time on Thanksgiving in the country’s most played rivalry. Westerly beat Stonington 15-0 before 4,400 fans in the 152nd meeting between the two.

Finally, there was the grand-daddy of them all…Needham and Wellesley that played for the 124th consecutive Thanksgiving.  It’s Turkey Day’s oldest continuous rivalry.