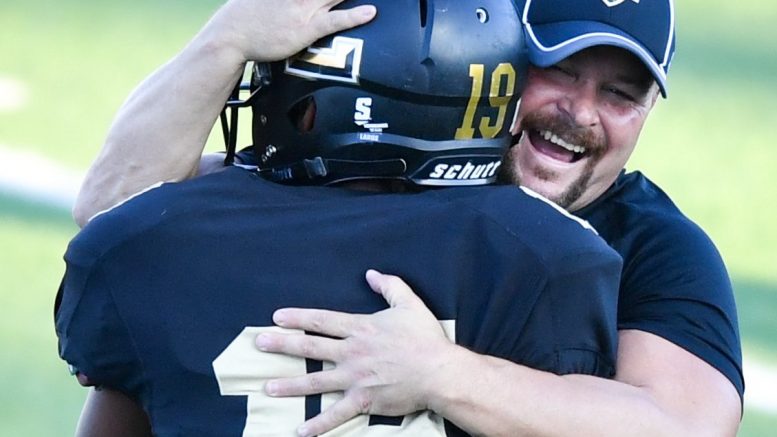 The Westerners found a way against Lake View Friday night.  That’s the great thing about football.  Find a way, dig deep down inside and good things happen.  That is exactly what happened for us late Friday afternoon.

We again shrugged off a sluggish start and overcame a 14-3 halftime deficit to win 24-14, scoring the last 21 points of the ball game. Freshmen RB Isiah Johnson rushed for 197 yards and a TD, while Kwami Wilborn threw for 133 yards and rushed for two more scores.  The Westerner defense pitched a shutout in the second half, allowing the LHS offense a chance to climb back into the game.

This was a solid team effort, with contributions coming from every phase of the game.  Manny Rodriguez hit another field goal; Blake Robbins had an interception and a key fourth quarter fumble recovery. Ashton Alexander had a 30-yard run from scrimmage and played a solid corner for us.  Everywhere you look, a Westerner came-up big in crunch time.

We need to keep working.  There are three big games ahead of us, all with massive playoff implications. These Westerners do not care who you are.  They will show-up and battle. They want the playoffs.  They have set themselves up for a fun three weeks.  Let’s enjoy the ride together!

The Running Back Tandem Tyberius Doss and Isiah Johnson have teamed-up to create a powerful and quick running combination behind QB, Kwami Wilborn.  It is fun to see this develop.

Tyberius is a senior and Johnson just a freshmen.  They both have their strengths and different styles of running.  Tyberius will drop the hammer and run you over; Isiah will slice and cut, stiff arm and hit you with blazing speed to the outside.

The other day Isiah was the hot-hand and we rode him to a win.  He had 28 carries for 197 yards. However, Tyberius had a big run for us and caught a nice screen pass to set us up.

Down the stretch, look for these guys to continue to run the ball tough and hard. It’s a great combination. We need to ride these guys while they are hot, as it opens things up for, Kwami.

I cannot say enough about our defense this year.  Week in and week out they are finding ways to keep us in games.  They just never relent.  It is a lot of fun to watch.

DC Nate Gensler has been OUTSTANDING!  He utilizes his staff and allows them to coach.  They are always on the same page.  Their chemistry is terrific.  Putting him in-charge of our defense is one of the best moves I have made in my career. David Moody, Jose Morales, Tyler Trout and Devin Kline comprise our defensive staff, in addition to Coach Gensler.  These guys have answered the bell and continue to push the right buttons for us. What a great bunch of guys!

Let keep it rolling, as we are in the thick of the playoff hunt down the stretch! Praise your staff as often as you can.  They deserve it.  It also goes a long way in your mind.  Making someone smile over a compliment you gave them is very fulfilling. Treat your guys right and good things will happen in your mind.

-Brandon Walker and Brian Richardson have been great additions to our coaching staff.  They have helped me all year with the special teams.  What a great job these guys do.

-It was great to see DJ and Kinsey back in Lubbock on Friday.  They were on the sidelines for our win.  That was a lot of fun.  They are like like family to Tracy, Danielle, our kids and myself.  We were all back together again.  It was awesome!

-Our new team photographer, Elise Bressler, has been fantastic.  She is taking some great action shots of our kids.  I will be using her pictures on our blog.  Elise is a student at TTU.  Welcome aboard, Elise! -The 49’ers got thumped in Buffalo today.  Fans in Buffalo were chanting USA.  The fans also stood for the national anthem.

-Clayton Kershaw is a beast.

Now it is onto Abilene Cooper. Big week ahead of us!

The Turnaround: Camp Winds Down

The Turnaround – Thinking and Writing