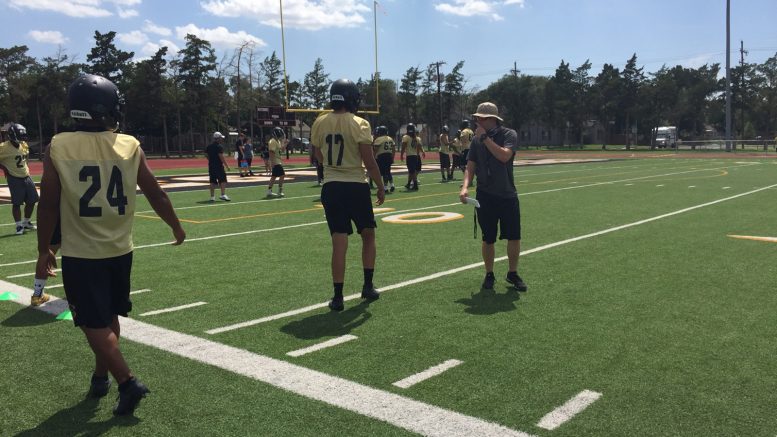 It always amazes me how fast football goes by. You wait all off-season for it to get
here. Once it’s here, it’s goes by in a blink, probably because we are so busy. Well, Week One came in like a sheep and went out like a lion! It was fast.

So, sitting here on the eve of Week Two, I thought it was a good time to reflect on Week One and move onto Week Two. We have a big week coming up, as our first scrimmage looms. I will have plenty to talk about this upcoming week. Before I get to that, let’s look back on Week One. It came and it went, just like that. We hit the field Monday and it has been a blur ever since. We opened up with an evening practice and wouldn’t you know it, we got
drilled with a storm that dumped lots of rain on us. Nothing like opening up with a
little adversity!

Despite the rain on opening day, the Westerners had a great week and got better every single time out. We hit the ground running and things have been smooth.

My emphasis during Week One is to establish the attitude, mentality and work ethic. LHS knows who we are and what we are after Week One. We pushed the tempo in practice
and did not relent. We work fast and we do not accept anything less than their best
effort on every single rep. It’s just how it has to be.

The kids got it and did well. In fact, I really need to recognize my off-season
training coordinators, Tyler Lloyd, Nathan Slaughter and Nate Gensler. They got us
stronger and by far-and-away much faster. We were in shape on Day One and we got
stronger as the week went by. We hang our hats on our conditioning. We always feel
we will be the best conditioned team on field. We installed our basic principles on offense and defense. The kids handled it well.
Lots of learning going on, but we were able to handle it and play fast while doing
so. It was definitely a solid week of X’s and O’s. Any head coach would be pleased with that. So Week One was a complete win for us. We accomplished everything we wanted and needed to. Now it’s time to build on Week One and have a good week of practice before our first scrimmage.

We head to Sweetwater on Friday night for our first scrimmage. Nothing like opening
up with the state runner-up from last year. It will be a good test for us.

This week begins the first of 12 straight game weeks for us. We have two scrimmages
and ten games. It’s good to get into a routine and just roll through the season.

As far as scrimmage prep, I do not go crazy. I have one goal in mind: win on September 1 against Seminole. We will not show anything in our two scrimmages. Plain as can be with limited reps with our number one guys. I look for effort and toughness. That’s all I look for in scrimmages. Obviously, I want to execute on both sides of the ball, but I don’t go crazy, if we misfire a little bit. That’s why it’s called a scrimmage.

I want to see us progress all week long and have a good feeling heading into Sweetwater. That’s the goal.

As we go here I will begin to talk about the players a bunch more. We have a good
group this year, the mentality seems to be right where it needs to be. I am enjoying
this team. So there will be plenty of individuals to talk about in the upcoming
weeks.

-The world’s problems cannot be solved in 140 characters on Twitter. Waiting for the
light to go on with this one with the human population.

-Coach with energy. If you do this, your team will have energy. The energy you emit
will permeate into the team.

-Saw Tebow hit another home run the other day. Pretty impressive what he is doing. I
have never understood for one minute why he has received so much negativity from sports fans. All the guy has ever done is win and play the game the right way. I would take that any day of the week on my team.

-Read a great article on Bob Stoops last night. Got to admire the guy for leaving
coaching on HIS terms. What a great career he had!

-Can’t wait for college football to kick off!

-Not looking forward to hearing the “expert” pundits comparing college football “resumes” to get into the playoffs. You would think in 2017 there would be an effective process to do this. Gee, every other level of football has a real process,
including DII and DIII. Wonder what is boils down to? ($arca$m)