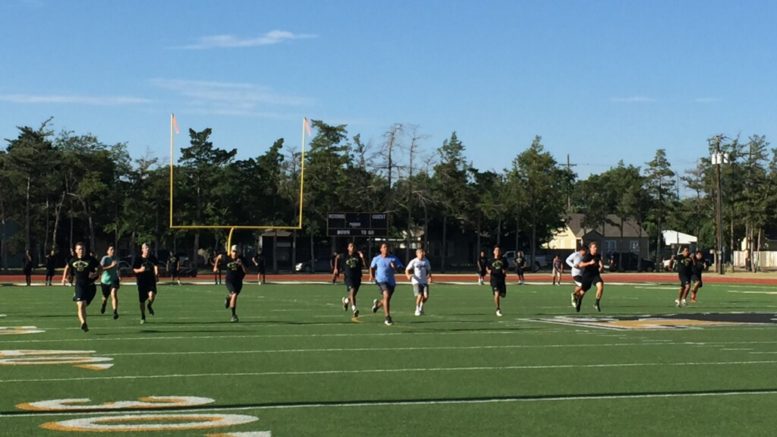 Friday night was our first test of the year, in the form of the Sweetwater Mustangs.  They are a perennial playoff power and loaded once again this year.  They are as good as they come.

It was a good scrimmage for us.  We gave up a touchdown to them with our first defense.  We were not able to punch one in.  We played a total of 70 plays and we got exactly what we wanted out of it.  Overall, I left feeling pretty pleased about what I had watched. It was a great night for football at Chapman Field, our home practice facility.  Clear, blue skies and a little breeze.  The stands were packed with fans from both sides.  You could not have asked for a better night!

Friday night was a perfect west Texas football night!  I am proud of our effort and what we accomplished!

In the wee-early hours of Friday morning the staff got together and went over our depth charts.  This was the meeting that set the tone for our scrimmage and provided is a blue print.

We knew we had 35 plays on each side of the ball.  We went through each position and assigned a play number to each player.  We wanted to see some young guys play a little bit more than some of our returning starters.

For example, we know what Dae Dae Morgan, Blake Robbins, Happy Martinez and Christian Coleman can do.  They didn’t play as much as they would like, but it was by design.  We rotated four running backs through the mix and only had Dae Dae in for about four plays.  We played freshmen Isaiah Johnson, junior Ashton Alexander and senior Ty Doss at running back.  We just wanted to see wha they can do.  We accomplished that.

So that was what we did.  We assigned plays and went with it.  We wanted to come out healthy and take a look at some unknown commodities.

Friday night our Sub-Varsity teams scrimmaged Sweetwater as well, the prelude to the varsity scrimmage.  We did some good things on these levels.  They were very good scrimmages!

We keep building the numbers and building players in feeder programs.  It is starting to pay-off.

-Sweetwater is a loaded team. And, they are also loaded with great people.  HC Shane Mobley is one of my best friends.  He is an outstanding coach and person.  We help each other out a lot.  Our staffs get a long tremendously. Those our some great guys there in Sweetwater!

-Sticking with Sweetwater, it was great to see former TTU assistant and current Sweetwater assistant, Kevin Oliver.  Great guy!  I got to know him and his other half, Courtney Davis, while they lived in Lubbock.  Fun seeing them Friday night and chatting!

-I wish A-Rod would have hit four bombs in his Yankee finale Friday night.

-I think this the closest coaching staff I have ever been on.  These coaches are fantastic!

-Serious question here.  I see college coaches always saying how they strip recruits of offers for things they have said on social media.  I wonder how many of those offers that were stripped were for 5-sar guys?  It’s an honest question. I’m curious.

Alright. I have written enough. Time to move onto the next task. Saturday morning sky at Chapman Fieldhouse as Strunky and his staff break down film from the scrimmage.

The Turnaround – Finding Some Peace

The Turnaround: Preparing for Seminole