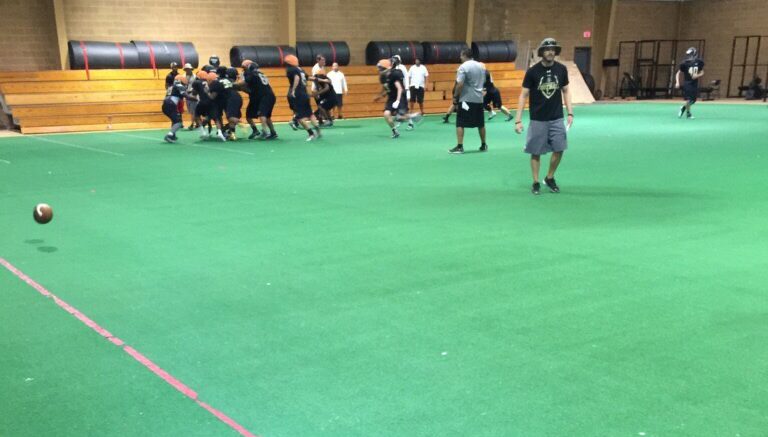 The Lubbock Westerners were forced into their indoor facility for Monday's session.

The Word of the Day today was sustain.  After the great week we had last week we wanted to keep the momentum going.  So the word sustain was right on point for today.

The Westerners came-in and most definitely sustained the momentum and vibe we created last week.  Very, very impressive.  The effort was great today!  The best part about today was we were thrown a curveball and we kept on ticking.

About five minutes into practice we were forced off the field due to lightning in the area.  Naturally, it didn’t rain, because why would it rain in west Texas?  So we were only teased with some bright flashing.  That was all.  But, it was enough to force us inside for two hours.

We responded.  We practiced well and the tempo was great.  Maybe the best practice we have EVER had indoors.  I am very thankful we have an indoor practice facility.  It can in handy today.

So it was another solid outing by the Westerners.  A great way to start the week by sustaining our momentum from last week!

It’s getting close to that time when we finalize captains for 2016.  We have a good group to choose from and I’m asking them rise to the top right now.

Even though we live in a society where everyone thinks you get a ribbon for something, I make kids earn things.  These captains will earn their spot and they are constantly auditioning for it.

This coaching staff has really bonded together.  They are enthusiastic, they collaborate and most importantly they like being around each other.  I actually need to tell them to go home to their families instead of laughing and carrying on with each other when practice is over.

We made a few staff changes and it has turned out to be a blessing.  Adding some new blood, a mix of veterans and young guys, has proved to be an outstanding combination.

We are in this together every day.  No cliques, no offense versus defense rivalries, no nonsense stuff.  We have focused on the kids and helping each other solve problems without problems.  This may be the best staff we have ever assembled.  It is very refreshing!

I will talk more about these guys as we get going deeper into the season.

Most of this stuff is common sense.  But, sometimes common sense escapes you when you aren’t clicking mentally.

Be you, fellas.  That’s the only way to coach football and live life.

-Country music is irritating and makes me want to claw my eyes out.

–Michael Phelps won his 19th gold medal. Good for him!  Prove all the perfect people in the world wrong.

–Bryce Harper is having an off year.  It’s ok.  He will bounce back next year and then join the Yanks in 2018.

-I saw the Mets are retiring Bill Buckner‘s number.  That’s odd…he never played for them. I wonder why….oh, that’s right…1986.

-NFL game canceled last night.  Has to be embarrassing for them.  Wonder is they are going to blame or suspend Tom Brady for this mess?  If they do punish Tom, I guess his suspension wouldn’t happen until 2020.  Just how ole Roger works.

-College football is getting closer.  Nice to have a Heisman hopeful playing in my backyard.  TTU has it rolling!  Hope it’s their breakout year under Coach Kingsbury.

It’s about all I have today. I’m sure more will come to me tomorrow.