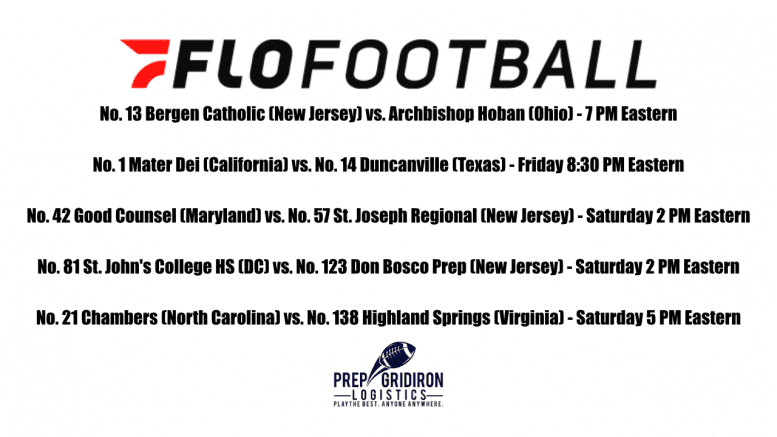 Headlining the weekend’s slate of games will be Friday night’s interstate showdown between No. 1 Mater Dei (California) squares-off with No. 14 Duncanville in Texas. It will be the season-opener for both teams, who have played their fair share of interstate games over the past several years.

Since 2017, Mater Dei, which won our national championship in 2017 and 2018, is perfect when playing teams outside of California. Head coach Bruce Rollinson’s troops are a perfect 7-0 against non-California schools.

Unlike most Texas teams, Duncanville hasn’t been shy about finding games against opponents outside of the Lone Star State over the last three years. The Panthers are 2-1 since 2018 against out-of-state opponents.

Kickoff for Friday night’s game is 7:30 P.M. Central Time. Click the link below to watch the game LIVE on FloFootball.

Kicking-off about 90 minutes before the MD/Duncanville game will be the New Jersey/Ohio showdown between No. 13 Bergen Catholic and No. 16 Archbishop Hoban.

The third intra-Top 100 matchup features No. 42 Good Counsel (Maryland) at No. 57 St. Joseph Regional of Montvale, New Jersey. These two will also be playing their season openers. The game kicks-off at 2 P.M. Eastern Time.

The other two matchups feature teams ranked in the High School Football America 300 national rankings powered by NFL Play Football, the NFL’s initiative to provide fun and engaging experience for players of all ages and skill levels.

The final game will be in Virginia at 5 P.M. Eastern with No. 138 Highland Springs hosting No. 21 Chambers (formerly Vance). Chambers has won back-to-back North Carolina 4AA state titles. Highland Springs won four straight titles from 2015 through 2018. The Springers lost in the Class 5 state championship game in Virginia’s 2021 spring season.

Both North Carolina and Virginia played spring seasons after postponing their 2020 seasons, because of the coronavirus pandemic.

All of the games are produced by Prep Gridiron Logistics.

Highland Springs tops Manchester in No. 1 vs. No. 2 Showdown in Virginia