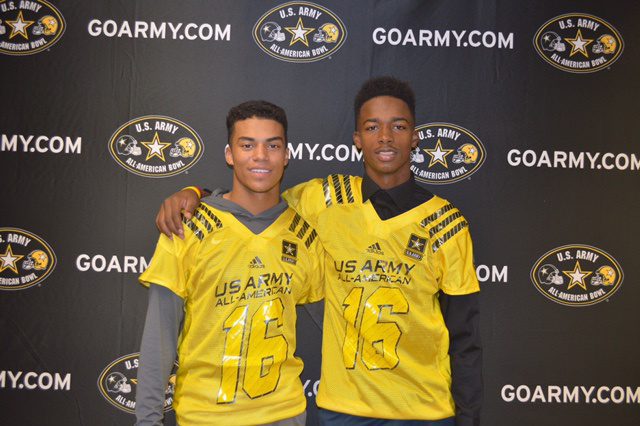 Tyler Vaughns and Trevon Sidney have known each other since they played against each other in youth football in Pasadena when they were in grade school. If playing together at Bishop Amat (La Puente, Calif.) and their commitments to Southern Cal weren’t enough to link the senior receivers, they’ll be competing together Jan. 9 in the U.S. Army All-American Bowl.

They were honored Monday at their school as part of the 2016 U.S. Army All-American Bowl Selection Tour presented by American Family Insurance.

The honor caps a good day for Sidney. He practiced Monday for the first time since injuring his knee in the Lancers’ season-opening 24-21 loss to Mater Dei (Santa Ana, Calif.). Since that defeat, Amat has gone 4-0. Sidney is expected to return for the Lancers’ game Friday with Crespi (Encino).

“I’m coming back this week — it should be fun,” Sidney said. “Playing in the (All-American Bowl) is a big deal to me. I grew up watching it. Just getting that invitation meant the world to me. Getting the ceremony now brings it to reality.”

Vaughns’ uncle served in the Army, so the chance to play in the All-American Bowl has special meaning to him.

“The coolest thing today was meeting the Army officers and having so much respect for them,” Vaughns said. “We’re free and can do what we want in America because of what they do.”

In Sidney’s absence,  Vaughns has carried the team, with 33 receptions for 500 yards and six touchdowns, plus a rushing touchdown and 228 yards in returns.

“Tyler is really doing a good job and definitely the guy on the team who is taking us places right now,” Bishop Amat coach Steve Hagerty said. “We haven’t been able to use Tre this year except for the very first game. Hopefully, he’ll get back in the swing of things.”

For Vaughns, having his friend back also means defenses won’t be able to focus exclusively on him.

“Now they can’t just double-team me,” Vaughns said. “Teams have to play us evenly. I felt I had to play at a different level for my team. I just stepped up and did what I could.”