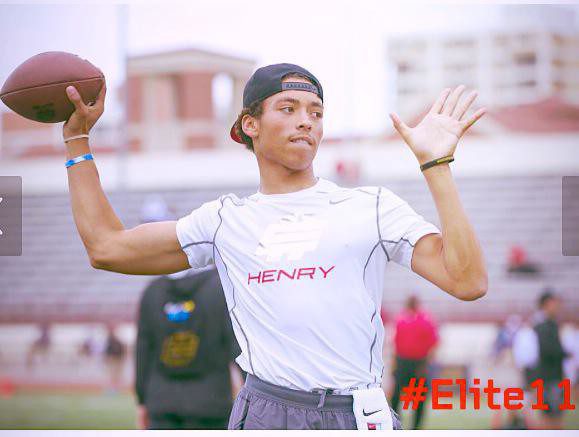 When Malik Henry left IMG Academy to return to California, he knew that he would be leaving behind close friends that he had made in a short period of time. He knew that he would probably have to wait while being cleared to compete by the California Interscholastic Federation. He knew that by choosing to attend Long Beach Poly, he would have to fight for playing time back on the field. Yet, he also knew that he had a monumental accomplishment on the horizon: He was about to accept his invitation to the Under Armour All-America Game, solidifying his place as one of the nation’s top quarterbacks.

“This is a great opportunity for me,” Henry told USA TODAY High School Sports after he received his jersey as part of the Selection Tour presented by American Family Insurance. “I’m really thankful for Under Armour picking me to be an Under Armour All-American. I’ve been dreaming about this day. I think it’s a really big deal for me. Growing up watching the game kind of made me want to be a part of it a bit more. I’m so happy I’m able to take place in the game.”

While it hasn’t been automatic, Henry said that the transition back home from Florida has been less onerous than many may have expected. He credited his ability to quickly absorb a playbook and a program’s offensive philosophy as the primary reason for his relatively quick adjustment, and said that what he really missed about Florida were the friends he left behind at IMG Academy, going so far as to say that he is already planning a trip to visit them before he begins the spring semester at Florida State, where he has committed to play for coach Jimbo Fisher.

Mostly, he’s just happy to be home, playing in front of his family and oldest friends — and particularly his younger brothers, who he said will be at the Under Armour Game in Orlando — in his final high school campaign.

“I’m so glad to be home,” Henry said. “I’m glad I get to play my senior year in front of my family. I’m glad I’m at Poly. The tradition here is great, the alumni is great. The school pride is everything I’ve ever wanted in a school. Going to Florida State I’ll be on a big stage so why not get used to it now.

“My grandparents live in Harbor City, and if you go down Atlantic where Poly is you can take the Pacific Coast Highway all the way down to their house in about 15 minutes. My Grandpa used to be an assistant principal here at Poly, so I grew up going to Poly games. Everybody is close and I can walk to school if I want.”

The fact that the Under Armour Game is competed in Florida has already earned Henry some attention from Florida State fans anxious to get a sight of their team’s future signal caller. And while Henry was quick to add that he’s currently, “working on a couple of guys,” to convince them on a future in Tallahassee, his primary motivation for accepting an Under Armour invitation over a U.S. Army Bowl offer was the chance to conclude his high school career alongside close personal friend Brandon Burton, the Junipero Serra safety who will also play in the game.

Now that he has his jersey, Henry is ready to move on with the season, all the while looking forward to a week in January where he and some of the nation’s other top quarterbacks can all push each other while taking a last shot at high school football on a bigger, brighter stage.

“I’m just looking forward to having a good time and playing with a group of guys who all have the same goal, to be a scholar athlete and excel at the next level.”