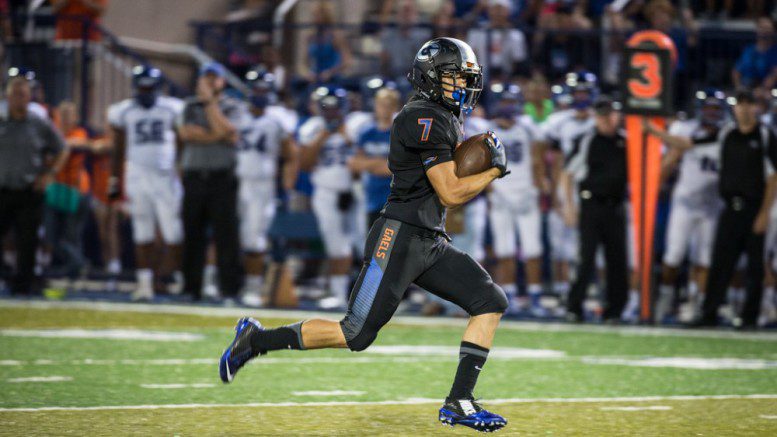 Nicco Fertitta may have saved Bishop Gorman’s march to a state and Super 25 title last season when he drove his shoulder into Bingham quarterback Kyle Gearig’s back, forcing a fumble and preserving a 23-20 overtime victory.

Fertitta has graduated and is looking to break into Notre Dame’s defensive backfield. Gearig is serving a Mormon mission in Spain. Neither of their absences takes the shine off of Friday night’s meeting (9 p.m., ET) between the Gaels, who are 1-0 and again No. 1 in the Super 25 and the 2-0 Miners, who are No. 5 in the Super 25 Frontier Division and have not allowed a point this season.

Bishop Gorman will take a six-hour bus trip from Las Vegas to Bingham’s stadium in South Jordan, Utah, where more than 20,000 are expected to attend the game with more watching on local TV station KMYU.

“Our guys are ready to go,” Bishop Gorman coach Kenny Sanchez said. “They’re fired up. It’s just week two and we’re still fresh. This is going to be another big game. We know we’re not overlooking this game.”

Sanchez is in his first year as the Gaels’ head coach but was a longtime assistant with the team. Ditto for Bingham coach John Lambourne, who became the head coach when Dave Peck retired after Bingham won its fifth state title in 15 seasons last December. For Lambourne, having the No. 1-ranked team in the country playing a game in the Beehive State shows how far Utah high school football has come.

“Their reputation is very strong and they are usually in the national rankings,” Lambourne said. “I don’t know in terms of national rankings that teams in Utah have been a part of that conversation, but that’s changing. You go back to 2007, when we beat Kahuku, from Hawaii. Then we had losses to Trinity (Euless, Texas), which is always in the rankings and Orange Lutheran (Orange, Calif.). The last two years, we beat Valor Christian (Highlands Ranch) from Colorado. There has been a history that has built for this game here. Certainly what happened last year with Bishop Gorman helped. It’s a good thing for Utah football and Utah sports, where we have been overlooked a bit.”

Bishop Gorman won its 25th game in a row last week, defeating then-No. 20 Chandler, Ariz., 35-14 as Biaggio Ali-Walsh had a touchdown run and ran in another score after catching a screen pass. Preseason ALL-USA quarterback Tate Martell had two touchdown passes, including the one to Ali-Walsh. The Gaels’ defense slowed Chandler’s offense, which had not been held to two touchdowns since 2013.

“Our defense played really good, but we need to learn to start games fast and be ready to go,” Sanchez said. “Overall, I give ourselves a B for the game defensively. A couple of guys, cornerback Malik Hausman, Greg Francis at free safety and SAM linebacker (Palaie Gaoteote), who is a sophomore and had an interception and a sack, stepped up.”

Bingham, known for its run-oriented game, may open things up more this season with quarterback Keaton Torre, a Louisville commit who transferred from Santa Fe (Edmond, Okla.).

“Their quarterback from last year was a really mobile guy,” Sanchez said. “He would run the powers and counters. The quarterback this year is more of a pocket passer. He’s tall (6-3) and has a great arm and his receivers are good and tough. As far as running the ball, they look similar to last year. Defensively, they’re better than last year.”

Lambourne said it will be important to contain Martell, who has committed to Texas A&M.

“I think the status quo is what you have to go with,” Lambourne said. “We’ll have eyes on him. We’ve played teams that function like Bishop Gorman. A few years ago, we played Jordan (Sandy, Utah), who had a mobile quarterback in Austin Kafentzis (now at Nevada). Keeping (Martell) in the pocket is something we want to do. Of course, you have to be solid on the defensive backfield if you don’t put that much of a rush on.”