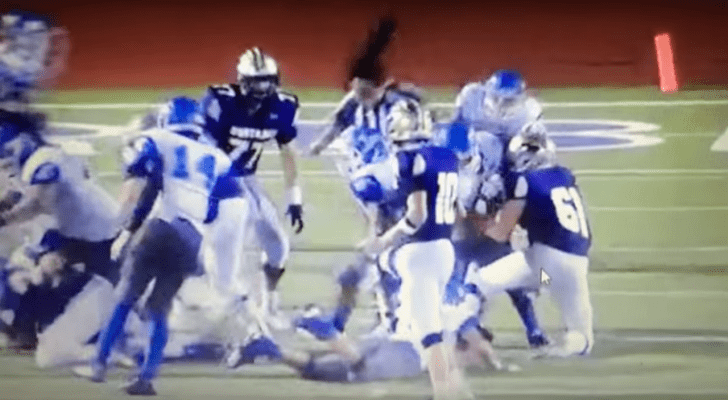 The University Athletic League said it believes the incident in which two John Jay players blindsided an official does not reflect the culture of the program but did not reach a determination on potential punishment, including possibly placing the head coach on probation.

“I don’t think this incident is the kind of culture you’re trying to develop there at all,” State Executive Committee chair Mike Motheral said.  In fact, it’s the opposite. We have so much evidence to the contrary.”

The SEC, in a three-hour plus hearing Thursday in Round Rock, Texas, also questioned the management of the game by the officials regarding allegations made by players that umpire Robert Watts used racial slurs.

Watts did not appear at the hearing but again denied using any racial remarks through his attorney. His attorney said Watts has been diagnosed with a concussion and post-concussion syndrome and is under medical care.

The Texas Association of Sports Officials also said its investigation found no evidence that racial slurs were used and said the hit on Watts “was deliberate and not accidental.”

“On behalf of the hundreds of thousands of high school officials across the United States, I ask that you take into consideration the premeditated nature, this vicious attack and indefensible motives and resulting consequences and take appropriate action,” TASO chief Mike Fitch said.

The committee said that now-former John Jay assistant coach Mack Breed cannot coach in the UIL until he appears before the committee. Breed initially said that he directed the players to hit the official and later recanted. He has since resigned.

Neither player appeared at the hearing and the committee said it could not make further determinations until they heard from the players. Motheral said the players will speak to the committee in mid-October.

“We were hopeful we could get everyone here and make a final decision, but that wasn’t the case.” Motheral said. “We recognize the students have difficulty getting here. Because of what we hope to hear from them, it creates a problem for us in taking action in other areas.

“We would like to put this to bed and we recognize that. But we need all the facts before we do.”

The UIL has a range of options, including suspending the Jay program. They also can discipline players and coaches.

The two students were part of a school discipline process Wednesday and were sentenced to 75 days at the alternative school before being eligible to return to Jay High on Jan. 15, according to their attorney. The district assured the SEC that neither would be allowed to return to the team before they speak to the committee.

The hearing focused on three main issues: the fate of Breed (see link), the culture of the Jay program and whether the official used racial slurs.

The Texas Association of Sports Officials said it hired an outside firm to handle its investigation and Fitch said “the investigation has uncovered absolutely no corroborating evidence that a racial slur was ever made.”

Investigators said they talked to the game officials, member of the crew that Watts worked on last season, the previous officials association that he worked for and the best man at his wedding who is African American among others.

“I don’t see how anyone can draw any conclusions that this is a man who would issue racial slurs,” Fitch said.

TASO is expected to have its full report in 10 days for the committee. Motheral said once the report is reviewed, the incident could be referred to UIL’s Sports Officials Committee.

Committee members expressed concern that the officials did not seemingly address the allegations of a racial slur made during the game when Jay coach Greg Gutierrez brought it to the attention of the head linesman on his side of the field.

Committee member James Corbett said it “seems odds in the heat of the game, some teenagers would be so disturbed that they’d dram up racial allegations and go to their coach.”

Committee member Gil Garza said he was disturbed that the game official shrugged off the allegations when presented with them.

TASO said the situation was dealt with on a stoppage of play or Jay could have called timeout and brought the referee over to the sideline.

“I don’t know what you can do in the middle of a game,” Fitch said.

Fitch referred to the Jay report, saying the allegation of a racial slur was made after Jay’s Moses Reynolds was ejected a few minutes before the blindside hit.

“The referee and umpire came to the sideline, the head coach states after the ejection that we had a kid say the umpire called him,” Fitch read. “The referee says, ‘No way, we’re not going to listen to that.’ The umpire says, ‘That did not happen.’ ”

TASO said eight players were around the play when Reynolds was ejected and at least one should have heard him.

In his testimony — his first public comments on the incident — Gutierrez described the sequence:

“We had a player come to the sideline after we were on offense as we were punting the ball to tell one of the assistants that he was called a racial slur. I was informed of them, we punted it, the change of possession occurred and I informed the linesman of the alleged comment. I asked him to communicate that to the referee and to let me know if there were situations occurring on the field that I could address. His response was, ‘he wouldn’t do that’ or ‘that’s not happening,’ words to that effect.

“The player remained on and a few players later the player who heard the alleged racial slur was ejected. There was a flag with offsetting penalties and I was informed he was ejected for throwing a punch. I asked the head linesmen to provide more information. I wanted to make sure I had all the information in hand to address the situation appropriately. He went back out, and as he came back, he stated to me, ‘Coach before I tell you what the penalty was, don’t kill the messenger, I’m that messenger.’ He said that twice. He informed me it was for hands to the face and that it was a punch.  He said, ‘I didn’t make the call. It was not my decision. Play resumed and the next play is when the incident happened.”

In his testimony, Northside ISD superintendent Robert Woods said, the player indicated to their coach “very clearly” that slurs were used.

Marble Falls also conducted an investigation and said no players have come forward to say they heard any racial slurs. That continued this week when the coach spoke with players who would have been near Watts near the game to again ask whether they heard anything.

The district provided a massive amount of documentation relating to how it runs its athletic programs, responsibilities of coaches and more.

“Our community remains heartbroken over this incident,” Woods said. “We have a firm belief that the incident is so well known now does not reflect the culture or the character of the school nor does it reflect what we stand for as a school district in Northside ISD.”

Gutierrez described the game as a “regular high school football game” until the final minutes, but Colbert and the committee wanted to know where things went wrong and why Gutierrez didn’t assert control sooner.

RELATED: Texas UIL investigation — what about the coaches?

“This is a reflection on you as a head coach,” Colbert said. “Your kids got away from everything that you tried to instill in them … They did something that is absolutely ridiculous … There are teachable moments in this incident, but it starts with you. This incident doesn’t reflect positively on anything you stand for.”

Gutierrez responded, “I’ve looked at the man in the mirror. I took ownership in this as well as being the leader, but at the same time, this is not reflective of the program or the coach I am or the coaches on our staff or the kids in our school and community.

“I’ve gone round and round to see what can I do better to ensure these actions don’t happen again … At the end of day, we run our program as a family. All of us with children hope and pray that we raise them the right way. Sometimes decisions are made that step outside the boundaries of our culture. At the same time, there are consequences when people step outside the boundaries and we’ve addressed those as well.”

Harris, the principal, said he fully support Gutierrez as the coach. He said they speak daily and he has strong opinions about the direction of the athletic program.

“I felt he was the right man to lead our football program when I hired him three yeas ago and I still feel that way today,” Harris said. “My relationship with him is stronger today with him than it’s ever been. There have been many conversations with him about what we can do so we don’t have this again.”

Would you pay $25 for a high school football ticket?