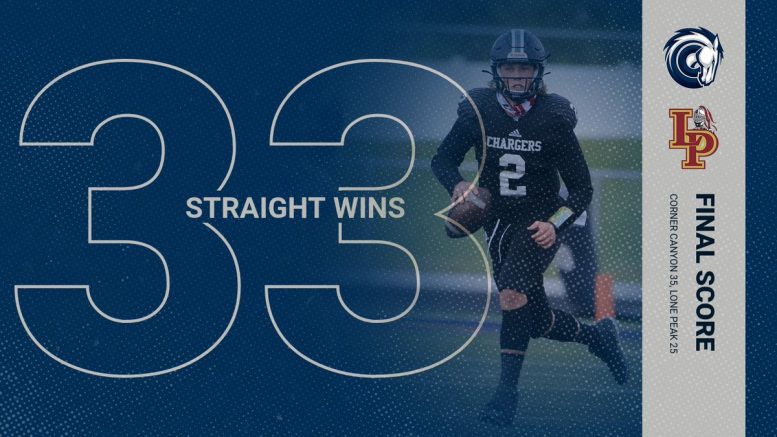 Two-time defending Utah state champ Corner Canyon fell behind No. 2 Lone Peak 10-0 Thursday night before bouncing back to win its 33rd straight game. CC, ranked No. 1 in the High School Football America Utah Top 10, beat Lone Peak 35-25 in what may be the first of two meetings between the two schools on the road to the 6A state championship.

John Henry Daley’s sack and fumble recovery for a touchdown gave Lone Peak a 19-14 lead and put CC in an unfamiliar position at the half…trailing.

John Henry Daley has been compared to JJ Watt…here’s a perfect example. Sack & fumble recovery for the TD!@LPHSKnights leads @CCHSFOOTBALL_ 19-14 at the half. @AFCU #TNL live now on KJZZ-TV @ streamed at https://t.co/BT1cZ8mhVt pic.twitter.com/TnavKGXF73

The third touchdown pass between Dart and Hagen put the Chargers ahead for good.

Dart threw four touchdown passes in the victory and he also ran for a score. Dart has now thrown or 31 touchdowns in seven games, plus he’s run for nine, giving him a hand in 40 scores for the 7-0 Chargers.

The leading receiver in the state @CCHSFOOTBALL_ Noah Kjar with the TD! We’re headed to the 4th with the Chargers leading at @LPHSKnights 28-19
Live now on KJZZ-TV & streamed at https://t.co/jAQeFMlDDt pic.twitter.com/06UJI8a4AP