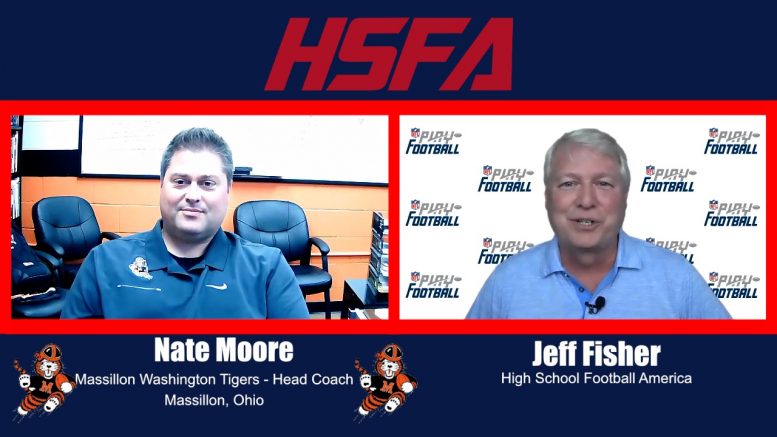 After three straight runner-up finishes in Ohio’s Division II, the legendary Washington Massillon high school football program is hoping to exchange those silver medals for a a gold one in 2021.

On Thursday, High School Football America’s Jeff Fisher spoke with the Tigers’ head coach, Nate Moore about his last six years of leading the program that is ranked No. 3 in all-time high school football victories.

The three straight runner-up finishes have landed the Tigers in the High School Football America 100 national rankings. The 2018 team finished No. 64 in the nation, followed by at No. 45 ranking in 2019. Last year, Moore’s troops finished No. 48 in the Top 100.

In the interview below, Moore, who won a state title at Cincinnati’s La Salle High School in 2014, tells Fisher that 2021 starts with just four returning starters. However, he’s excited by the depth in the program that will keep the Tigers in the hunt for another deep playoff run.

The Tigers’ 2021 schedule will be a challenging one. The team will open against 2020 Division I runner-up Pickerington Central on August 20. Another marquee matchup will take place September 17 against four-time Ohio state champ St. Edward.

On October 8, the Tigers will test their mettle against an out-of-state opponent, Canisuis from Buffalo, New York.

The regular season comes to a close on October 22 with the 132nd playing of The War of 1894 against arch-rival Canton-McKinley. The Tigers have won five straight in the historic series.

No. 52 Massillon Washington and Canton McKinley set for No. 130 in Ohio Rivalry known as the War of 1894