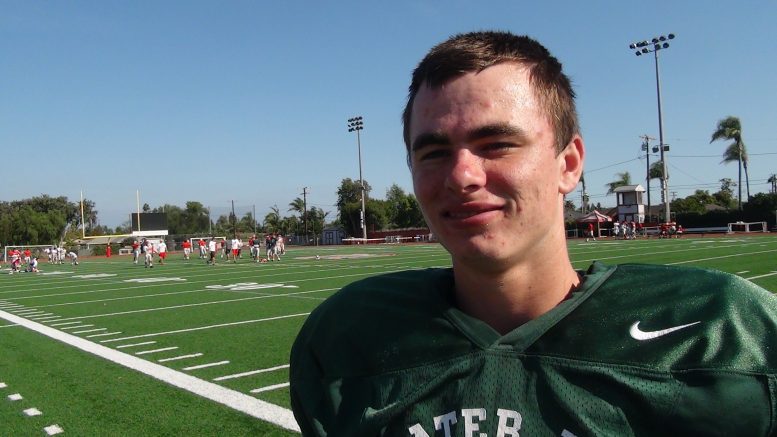 When you play quarterback at Mater Dei High School in Santa Ana, California, you’re playing among the shadows of the great quarterbacks that came before you.  The pressure of living-up to names like Heisman Trophy winners Matt Leinart and John Huarte or current Chicago Bears quarterback Matt Barkley is immense.

The latest in the long-line of quarterbacks could be the best of them all, before all is said-and-done.  Sophomore J.T. Daniels, who broke all of Barkley’s freshman records in 2015, is off to an incredible start that has led the Monarchs to a #3 national ranking.

Check-out this stat — Daniels has thrown more TD passes (23) than incompletions (20) through the first four games.  The 6-1, 195-pounder has completed 83-of-103 passes for 1,508 yards with just one interception.  The most amazing part of Daniels’ stats is the fact that he’s really only playing a half of football, because of four blowout victories.  Mater Dei has topped the sixty-point mark in three of its four games.

“The numbers are just a product of my offensive line and receivers making my job easy,” said Daniels.

Legendary Mater Dei head coach Bruce Rollinson says that Daniels’ start is very special, especially when you consider that he’s allowing Daniels to call all of his own plays.

“In last week’s game, we didn’t call any plays,” said Rollinson.  “We get him in the formation and he takes it from there.  We now have a coach on the football field.  Basically, my offensive coordinator is wearing a helmet and taking it from there.”

As far as living-up to those that have played the position before him, Daniels is humbled, but appreciative of the opportunity.

“You can’t put too much mind to that (playing at a school with Leinart and Barkley as former QB’s),” said Daniels.  “It’s a great honor to play at the school that they played at.  Those are some of the greats that have played high school football, college football and NFL.”

On Wednesday, High School Football America stopped-by the Mater Dei practice to talk with Daniels and Rollinson about what is nearly a perfect start to the season for Daniels and his teammates.  You can watch that interview below.

On the recruiting trail, Daniels is getting plenty of attention, even though he’s only a year-and-a-half into his high school career.  He’s already picked-up offers from Arizona, Arizona State, BYU, Cal, Notre Dame, Washington and Washington State.