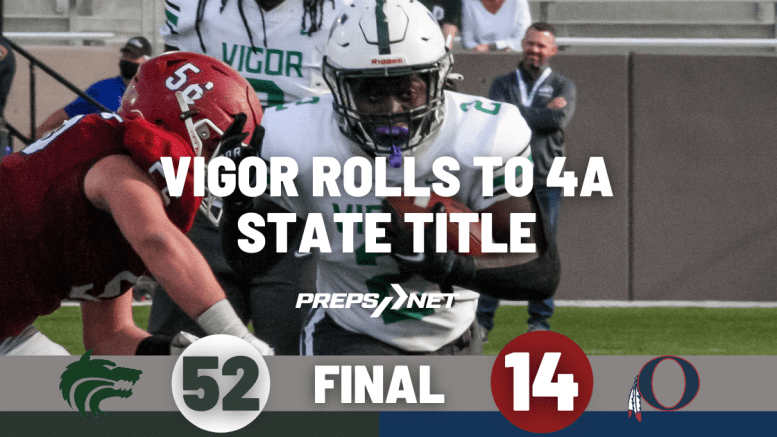 The following is from PrepsNet.com and AHSAA

By Josh Bean | For the AHSAA

Vigor and Oneonta traded touchdowns throughout the first half of Friday’s AHSAA Super 7 Class 4A state football championship game at Birmingham’s Protective Stadium and appeared headed for a nail-biting finish.

“You can’t come here and have a bad day and expect to win,” said Mix ,who won the MVP award after finishing 14-of-21 passing for 279 yards and three touchdowns. “To walk out of here as a state champ … it’s really surreal.”

Vigor coach John McKenzie said his team set two preseason goals: Beat rival Blount and win the state title. The Wolves opened the season with a 22-13 victory Blount 22-13 in the Battle of Prichard and accomplished Goal No. 2 by beating Oneonta Friday.

“I don’t think anyone in the state of Alabama works as hard as our guys,” McKenzie said.

Vigor earned its first state championship since 2008 and fourth in school history. Oneonta fell one win shy of its fifth state title and first on since 2013.

The 4A title game, as well as the Friday’s two remaining championship games set for Friday, the Class 2A and Class 6A finals, are being televised over the AHSAA TV Network and live-streamed over the NFHS Network. WOTM TV is producing the contests, and the AHSAA Radio Network is broadcasting all finals over its network of radio stations and the internet.

Oneonta scored first on Braden Moore’s 17-yard touchdown pass to Wil Robertson late in the first quarter for a 7-0 lead.

Vigor then scored on back-to-back possessions, with Jacori Barnes capping an 11-play, 59-yard drive with a 17-yard run, and Jermaine Coleman scored on an 8-yard run for a 12-7 lead.

Oneonta replied with Moore’s 50-yard touchdown pass to Jexton Johnson to make it 14-12 with 2:35 to go before halftime. Vigor capped the first-half scoring with 55 seconds to go before intermission, as Coleman scored on a 5-yard run. The Wolves led 18-14 at halftime and outscored the Redskins 34-0 in the second half.

“This is what we do,” McKenzie said. “Our team has been a resilient team all year. When a team scores on us, we go right back and score. We look forward to the second half because of our conditioning.”

Barnes’ 21-yard touchdown run with 9:42 to go pushed Vigor’s advantage to 38-14 and essentially put the game out of reach. Vigor’s Michael Towner added a 19-yard interception return for a touchdown with 8:41 to play, and the Wolves capped the scoring on a 36-yard TD pass from Mix to Daniels with 32 seconds to go.

Oneonta finished with just 199 yards of total offense, with about a third of that on the two touchdown passes. Moore was 3-for-10 passing for 74 yards, and Collin Moon led the running back with 60 yards on 16 carries. Oneonta’s Cameron Dailey led all tacklers with 14 stops. Brandon Purifoy and Brandon Whitsett had eight tackles each for the Wolves.

“My message to my team was I’m disappointed, but I’m not disappointed in them,” Oneonta coach Phil Phillips said. “(Vigor) didn’t get our best today. That team didn’t allow us to do what we have to do to control the game.”