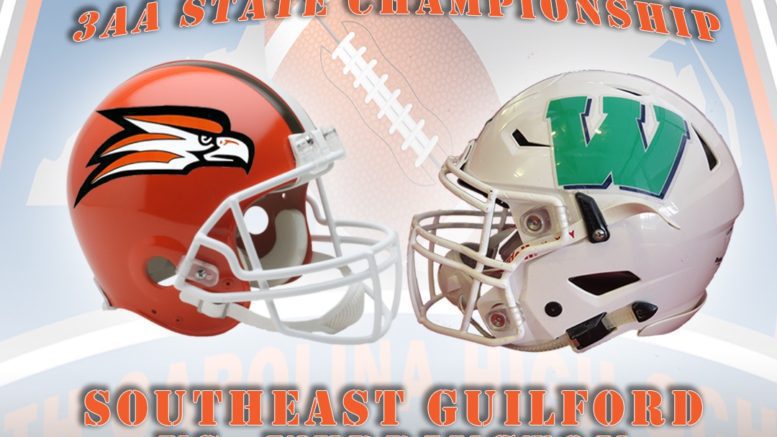 CHAPEL HILL, NC – The Weddington Warriors struck first, and struck often, as they ripped off a 27-14 victory over Southeast Guilford to claim the school’s second state football championship. James Shipley starred offensively and defensively for the Warriors, with an interception and return that set up a fourth quarter score to go with a 50 yard touchdown pass on a reverse pass and an 8 yard touchdown catch from his receiver spot. With ten receptions for 113 yards, as well as contributions in other areas, he was named the game’s Most Valuable Player.

Southeast Guilford’s opening drive stalled and James Shipley returned the punt to the Falcon 37 yardline, setting Weddington up in excellent field position for their first possession. After a procedure penalty backed the Warriors up five yards, Whitner Litton lofted a pass to Max Brimigion down the left sideline for a 42 yard score to put the Warriors up 7-0 with 9:25 to go in the first quarter.

The Warriors second possession was a bit more of a sustained effort, as they went 64 yards in seven plays capped off by a bit of trickiness. Wide Receiver James Shipley took the reverse handoff and set up to throw long to a wide open Will Shipley who took it the rest of the way 50 yards down the left sideline for a score to go up 14-0 with 2:29 to go in the first quarter.

In the second quarter, James Shipley found the endzone on the receiving end of an eight yard pass from Litton with 8:52 to play in the half. The PAT was blocked and the Warriors led 20-0. SE Guilford intercepted a screen pass midway through the second, which swung some momentum back the Falcons way. They mounted their best drive, chewing up over five minutes of clock with Ryan Douglas helping power the rushing attack. However, with time winding down in the half the drive stalled and a 44 yard field goal attempt was no good.

Southeast Guilford recovered a Weddington fumble in the early part of the third quarter, setting up the Falcons with a short field on the Warrior 36 yard line. Southeast scored four plays later as Douglas rushed across the goal line from 12 yards out to make it 20-7 with 6:42 to go in the third.

The Falcons were intercepted to start the fourth quarter, and James Shipley returned it to the Falcon five yard line. Two plays later Weddington cashed in the turnover on a Will Shipley one yard run to go up 27-7 with 11:01 to play. After the two teams traded possessions, Southeast Guilford took a shot deep and Douglas hooked up with Tyler Hoff who took it 83 yards to the endzone to trim the Warrior lead to 27-14 with 6:19 to play.

Douglas was named Southeast Guilford’s Most Outstanding Offensive Player with 126 yards through the air and a touchdown to go with his 86 yards and a score on the ground. Quantez Mansfield was the defensive Most Outstanding Player for the Falcons with six tackles including one sack and an interception from his defensive line spot.

Weddington’s Most Oustanding Offensive Player was Whitner Litton as the quarterback threw for 172 yards and two touchdowns while completing 67% of his passing attempts. The defensive Most Oustanding Player for the Warriors was Eamon Murphy who led the team in tackles with 9 and intercepted a pass, returing it deep into Falcon territory to set up the final Weddington score.

No. 16 Mallard Creek beats No. 55 Hough in battle of North Carolina unbeatens