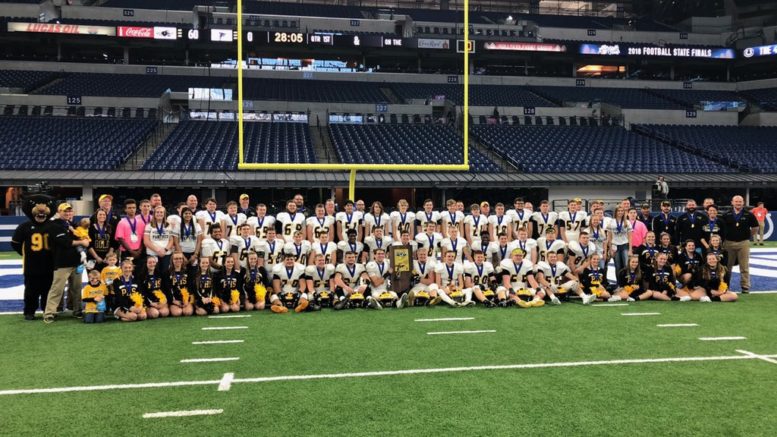 West Lafayette’s Sage Hood bulled in from 3 yards out with 52 seconds left to provide the winning margin in a 47-42 victory over Evansville Memorial in the Class 3A state championship game.

The victory in a thrilling, back-and-forth contest, wasn’t secured until Memorial quarterback Michael Lindauer’s final pass on fourth down at the WL 24-yard-line fell incomplete.

Sage Hood scores another! And West Lafayette takes the lead with under a minute remaining. @IHSAA1

Tune in now on FSI and the FOX Sports app:https://t.co/PLubinWhEQ pic.twitter.com/ipoIPkbeNh

West Lafayette coach Shane Fry on claiming the Class 3A title: “This senior class is outstanding. I’m so proud of these guys and for it to finish the way it finished, they deserved this.” @WL_AthleticsRDP pic.twitter.com/3bir0BLT4l

The title gives the Red Devils (15-0) their third state title in program history as they also won in 1993 and 2009 – the latter coming with a win over Memorial. The loss keeps the Tigers from their second consecutive title and breaks their 22-game winning streak.

The Red Devils scored the first two touchdowns on passes of 81 and 92 yards from Kyle Adams in the first 2:49 of the game. The Tigers came back behind Lindauer to take a 26-21 lead at halftime.

West Lafayette, coached by Shane Fry, again scored the first two TDs of the second half, one on a 1-yard run by Hood and the second on an 88-yard pass from Adams, for a 34-26 lead.

Memorial, however, rallied and eventually took a 42-41 lead on a 3A game record 45-yard field goal by Matthew Clark with 4:10 left. The Red Devils then embarked on a 13-play, 66-yard drive that Hood finished with his third touchdown of the game. He gained 133 yards rushing on 33 carries.

Adams finished with 466 yards passing and four touchdowns, while Lindauer had 340 yards and five scores – three to Branson Combs.

Kyle is a two-year starter for the Red Devils and was chosen for the All-Hoosier Conference team. He is among the Top 10 for career receiving yards and Top 10 for receiving yards in a season in West Lafayette history. Aside from football, Hazell also excels in Track and Field. Kyle has been voted the Track and Field team captain for the upcoming 2019 season. He is the 2018 sectional champion in three events and 2018 Hoosier Conference Champion in four events. Kyle qualified for the 2018 Track and Field State Finals in two events, 110m High Hurdles and 300m Intermediate Hurdles.

Kyle is the son of Darell Hazell and Annemarie Scaramuccia.  He is undecided on his college choice but plans to study marketing.

Each year the IHSAA Executive Committee selects a senior player who was nominated by his principal and coach and was determined to have best demonstrated mental attitude, scholarship, leadership, and athletic ability. The award is named in honor of the IHSAA’s seventh commissioner from 2000-11.

The Indianapolis Colts presented a $1,000 scholarship to West Lafayette Jr-Sr High School in the name of Kyle Hazell. The Colts have been the presenting sponsor of the entire football state tournament since 2009 and are sponsoring the Blake Ress Mental Attitude Award.

Most Passes Attempted (3A and Overall)

55 by Evansville Memorial vs. West Lafayette

28 by West Lafayette vs. Evansville Memorial

83 by Evansville Memorial vs. West Lafayette

Total Offensive Yards by Both Teams

24 by Evansville Memorial vs. West Lafayette

Most Passes Attempted (3A and Overall)