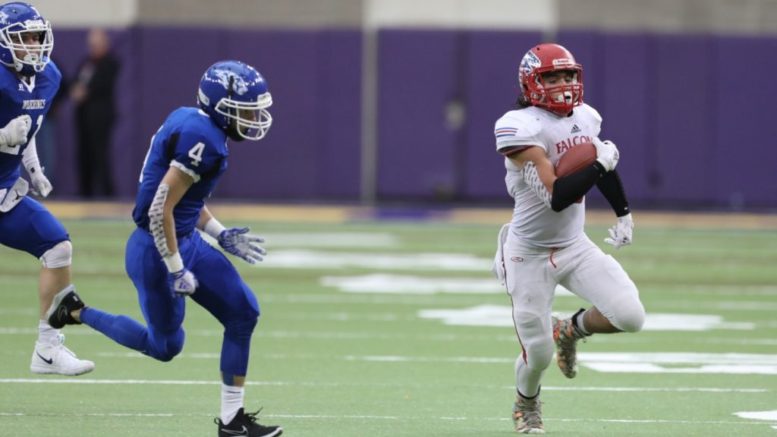 CEDAR FALLS, Iowa – West Sioux, Hawarden topped Dike-New Hartford in a wild Class 1A championship game on Friday, putting up the final 21 points of the highest-scoring 1A title contest in IHSAA history.

The Falcons (12-1) won the Class A crown in 2017, but trailed early against the Wolverines at the UNI-Dome with both passing games on display. West Sioux quarterback Hunter Dekkers starred with 391 passing yards and 120 rushing yards in the 52-38 thriller.

“That was by far the best game I’ve ever been a part of,” West Sioux head coach Ryan Schwiesow said after the win. “Anything is possible with the kids that we have.”

Dike-New Hartford (12-1) was fearless to open the contest as quarterback Drew Sonnenberg hit Cade Fuller for a 70-yard touchdown pass on their first offensive snap. Sonnenberg’s deep ball was a weapon against the aggressive Falcons, and his 11 completions went for 282 yards and four touchdowns, including five passes for 140 yards and three scores to junior Parker Kiewiet.

“They got up early. We fought back,” Schwiesow said. “Then they fought right back. I’m just glad our guys could come out on the other side of it.”

Dike-New Hartford was playing for its first state title as a program, having won 1A as Dike in 1981. Coach Don Betts’ club carried a 23-10 lead late into the second quarter, but gave up a short touchdown pass from Dekkers to Kade Lynott that made the advantage six points at intermission. West Sioux would score twice more in the third quarter, the latter a 45-yard hurl from Dekkers to Drake Millikan.

“Their quarterback could play,” Kiewiet said, “and he was just a gunslinger back there. They just managed to get behind our defense too many times.”

Lynott finished with a 1A title game record 10 receptions for 203 yards. Dekkers had a hand in six scores – five passing, one rushing – and impressed as a 6-foot-3, 225-pound two-way player.

“If you didn’t know who Hunter Dekkers was before today, now you do,” Schwiesow said with a laugh.

West Sioux finished with 597 yards of total offense. Dike-New Hartford managed 337, but with four of its five touchdowns coming on plays of 30 yards or longer, they battled back to a 31-31 tie and even went ahead 38-31 in the fourth quarter before West Sioux stormed to victory.

“We worked all season to be here, so nobody got down,” Kiewiet said. “We just kept fighting and fighting.”

Lynott tied the game on a 55-yard pass from Dekkers with 6:50 remaining, then helped the Falcons with the go-ahead score from 48 yards out with 2:03 left. A turnover and quick Dekkers scramble and score gave West Sioux an unlikely two score advantage and victory after a hard-fought contest.