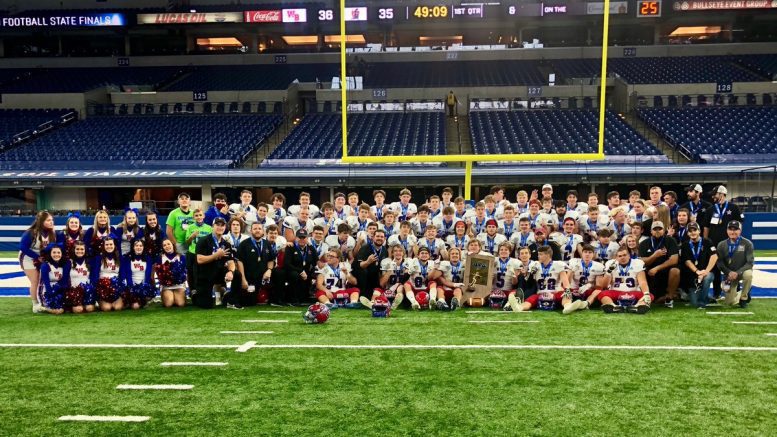 Josiah Smith booted a 38-yard field goal with :07 left to lift Western Boone to a thrilling, 36-35 win over Fort Wayne Bishop Luers in the Class 2A championship game.

Western Boone goes ahead for good with the 38 yard FG. Congratulations to the Stars and the class 2A football champions! @IHSAA1 pic.twitter.com/X62vNOmpVT

The Stars (11-4) scored 10 points in the final 1:36 of the contest to overcome a 35-26 deficit and claim their third-straight state title and 18th consecutive tournament victory.

The back-and-forth contest featured plenty of offense as the teams combined for 795 yards and 43 first downs in addition to the 71 points.

Luers (8-7) held a 21-13 lead at halftime. Behind the passing of quarterback Carson Clark, the Knights were able to take advantage of two Webo turnovers to build the nine-point lead after Clark connected for his second touchdown pass to Krashaun Menson (a 7-yarder) with 3:38 left.

Coach Justin Pelley’s Stars used a ball-control rushing attack to sustain their offense. Fullback Robby Taylor, who had a state-record 43 carries in the game, scored on a 1-yard run with 1:36 left to pull Webo within 35-33.

A failed onside kick seemed to spell doom for the Stars, but the defense came up with a three-and-out and forced a punt. Western Boone benefitted from a kick-catch interference penalty to give it a first down at its 46 with :39 left. Five plays later, Luers was flagged for pass interference giving the Stars a first down at the Knights’ 21. Smith, the son of former Colts punter Hunter Smith, came on to boot the game-winner.

Taylor finished with 210 yards and two scores, while Clark completed 17-of-21 passes for 303 yards and three touchdowns. Glenn Brody caught six of those passes for 171 yards and a 78-yard touchdown.

Congratulations to the Western Boone Stars, the #IHSAA Class 2A Football State Champions for the third consecutive year! ⁦@WeBoAthletics⁩ pic.twitter.com/Py71KRbdKQ

He is the son of Kyle and Danette Marsh of Lebanon. He plans to attend either Marian, DePauw, or Indiana Wesleyan but is undecided on what he will study.

Congratulations to Luke Marsh of ⁦@WeBoAthletics⁩, this year’s Blake Ress Mental Attitude Award recipient for Class 2A Football and presented by the Indianapolis ⁦@Colts⁩! pic.twitter.com/uyw3LxYoo3

The Indianapolis Colts, a corporate partner of the IHSAA, presented a $1,000 scholarship to Western Boone High School’s general scholarship fund in the name of Luke Marsh.