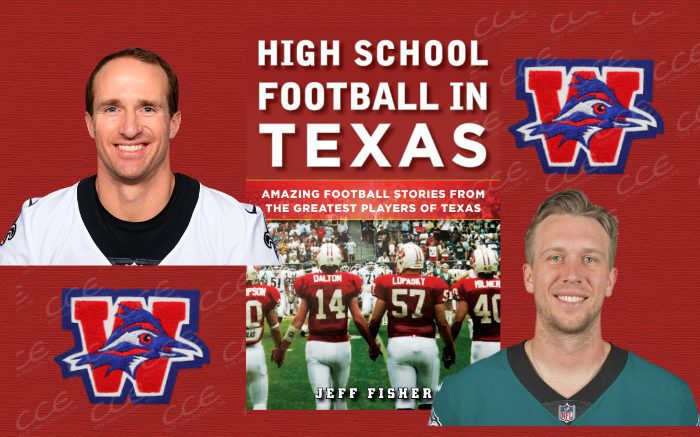 We thought the Battle of Former Westlake Quarterbacks was going to happen in last year’s NFC championship game, but Minnesota’s shocking last play touchdown ended Drew Brees’s drive for a second Super Bowl appearance and a showdown with Nick Foles for the right to play in Super Bowl LII. Sunday afternoon, Brees and Foles, who both played at Westlake High in Austin, Texas, will finally square-off, but this time in the NFC divisional playoff game between the Saints and the defending Super Bowl champion Philadelphia Eagles.

Brees, who you can read about in my book High School Football in Texas: Amazing Football Stories from the Greatest Players from Texas, had an inauspicious start at Westlake. He didn’t even get a chance to show his talents in the Chaparrals’ first scrimmage during Brees’s freshman season.

“I’ll never forget it, he was the only player that didn’t play in that scrimmage,” recalled Drew’s dad Eugene “Chip” Brees, who is a lawyer in Austin. “After the game, I really want to go over and talk with the coach, but I didn’t want to be a helicopter parent, so I decided against it.”

“You have to remember, Drew didn’t play tackle football until ninth grade, because he played flag football up until that point,” Brees’s father continued. “He wasn’t part of the Westlake feeder system, so at the start of his freshman season he was fourth or fifth on the depth chart.”

“I really didn’t know who Drew Brees was when he arrived at Westlake,” said Ron Schroeder, the legendary head coach at Westlake, who amassed a record of 187-23-3 during his career. “Drew wasn’t in our feeder system, because he was at St. Andrews [Episcopal School], so I didn’t know what he could or couldn’t do, but I knew he had only ever played flag football.”

Schroeder added, “At that point, there wasn’t anything very special about him, so the coaches put him on the Freshman B Team. There are always a lot of players to get in during that first scrimmage. The coaches shouldn’t have let that happen, but it did.”

Brees finally became Westlake’s starting QB during the 1995 season. A deep run into the postseason ended when Brees tore his ACL. However, rehabbing from that injury served as a springboard to Westlake winning a state championship in 1996 with Brees at the helm of the offense.

Brees’s passing record stood until Foles came along. Foles threw for 5,658 yards and 56 TDs to break Drew’s records, but he never led the Chaps to a state title.