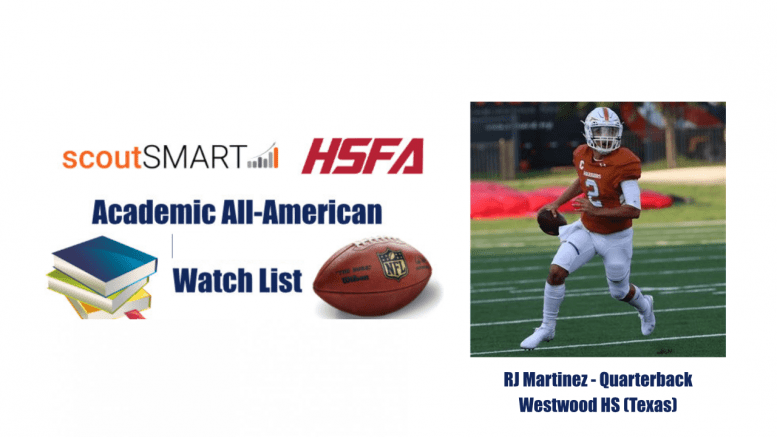 Congratulations to quarterback RJ Martinez of Round Rock Westwood High School in Austin, Texas on making the scoutSMART® High School Football America Academic All-American Watch List. Martinze, from the Class of 2021, owns a 4.0 GPA with an SAT score of 1050.

Martinez had an outstanding junior season in which he threw for over 3,400 yards with 29 touchdowns with only five interceptions. He completed over 67-percent of his passes. He also averaged 9.7 yards per carry while amassing 825 yards on the ground.

In August, he gave his verbal commitment to Northern Arizona.

Martinez set a Texas state record in his last game of 2019 when he completed 50 of 76 passes for 606 yards and seven touchdowns, plus he ran the ball 13 times for 193 yards and three touchdowns. Martinez even caught a pass for two yards.

“RJ’s football IQ is off the charts. He understands where all 22 guys on the field need to be. He is a coach on the field who can make decisions that put us in great situations.”

In the Warriors’ season opening 37-8 win over San Antonio Southwest, Martinez completed 9-of-14 passes for 204 yards with three touchdowns. He also ran for a score.

Foot down for the touchdown.

Westwood’s Julian Deberry is the leader in the clubhouse for this week’s @KVUE Play of the Week.@Julian_Deberry | @rj2martinez pic.twitter.com/8DzIFv2owi

scoutSMART uses its proprietary system that gives high school football student-athletes a scoutSMART FIT Score that analyzes a players’ stats, on-field skills and academics. scoutSMART then provides the information to college football coaches, at all-levels, around the nation.

Coaches, to learn more about scoutSMART, click on this link

Below are who we’ve honored so far:

We will be honoring players throughout the 2020-21 season. Coaches, if you want to nominate a player, please email us at [email protected].

In May 2021, scoutSMART and High School Football America will announce its 2020-21 Academic All-American Team.