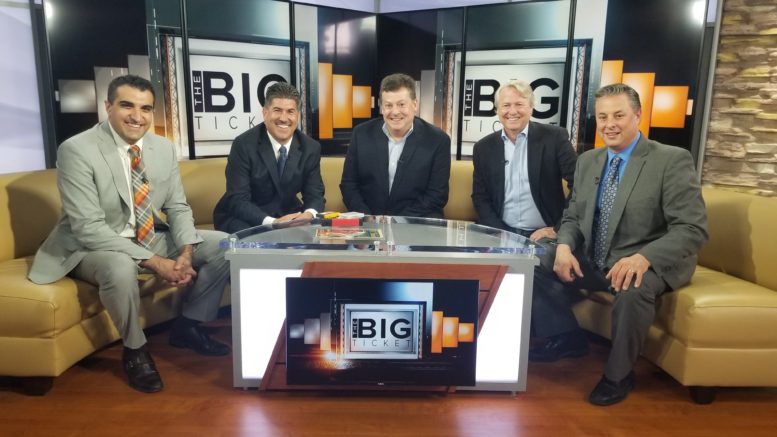 Friday night, WFMZ-TV in Allentown, Pennsylvania will celebrate the 25th anniversary of one of the nation’s true high school football gems — The Big Ticket — an hour-long, Friday night high school football highlights show that I was lucky enough to create along with my broadcast partner Doug Wright for the Lehigh Valley and surrounding area that includes Philadelphia, the Pocono Mountains and western New Jersey. The station will mark a quarter century on the air with an hour-long 25th anniversary special that will air Friday night starting at 11:30 P.M. Eastern Time.

About a month ago, I returned to my hometown of the Lehigh Valley for at book signing at Barnes and Noble in Bethlehem to promote my book High School Football in Texas: Amazing Football Stories from the Greatest Players of Texas and to tape a segment for the 25th anniversary special. I was joined by Wright, Phil Schoener, Dave Lesko and current WFMZ Sports Director Dan Moscaritolo, who directed our quartet on a journey down memory lane to those early years of the show that in 1999 was named the Best Sportscast in the State of Pennsylvania by the Associated Press.

Below is a little taste of the way things looked back in the mid-90’s. Please, no hair jokes…LOL!

If you miss the LIVE broadcast on Friday, there will be a couple of rebroadcasts at the times below. Finally, as part of this story, I did some research to find out how much of a pioneer the show is/was. I know for a fact that our stand-alone show, meaning the show isn’t tucked inside a newscast, was the first in Pennsylvania. BUT, was it the first in the nation?

And, then there’s Texas. I’m still waiting for some of my friends there to let me know when the first stand-alone show was broadcast in the Lone Star State. As soon as I get the info, I’ll update this story.

In closing, it’s been 18 years since I left the Lehigh Valley, but I still get a big smile when someone thanks me and the broadcast team for giving eastern Pennsylvania fans The Big Ticket. The show was designed to promote student-athletes, coaches, teams and communities, which is the same mission that I continue to use today as I build High School Football America.