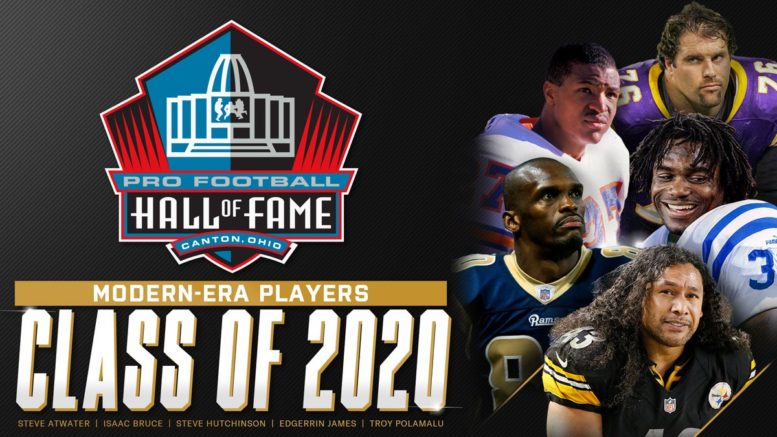 The 20-member Pro Football Hall of Fame Class of 2020 is complete with Saturday night’s announcement of the five modern-day inductees that will be honored in Canton, Ohio later this year.

Below is a snapshot of the five during their high school playing days. Three of the players — Isaac Bruce, Edgerrin James and Steve Hutchinson — played their scholastic ball in Florida. Safety Steve Atwater played quarterback at Lutheran North in Missouri and Troy Polamalu was an outstanding three-sport athlete in Oregon.

Atwater was a four-sport athlete at Lutheran North in St. Louis. Aside from football, Atwater, who was also an excellent student, played baseball, basketball and ran track.

In high school, Atwater was an option quarterback. During his senior season in 1983, he led the Crusaders to an 8-2 record, which included a first round loss in the 3A state playoffs to Country Day, a team they beat during the ABC League regular season. The ABC regular season title was split three-ways between Country Day, Lutheran North and Priory.

Atwater completed 71-of-133 passes for 1,097 yards with three touchdowns and two interceptions. He was named 1st team all-league quarterback and the league’s Most Valuable Player.

During Bruce’s senior season at Dillard, he helped to a 1989 Florida 4A state championship.

In the state championship game, Bruce caught four passes for 96 yards, including a 22-yard touchdown catch in the second quarter to give Dillard a 21-0 lead on the way to a 40-14 victory. Coming into the game, according to the South Florida Sun Sentinel, Bruce had only 16 catches, but he averaged 26.4 yards per catch.

The wait is finally over.

Hutchinson is considered one of the state’s all-time great players. In 2007, the three-sport athlete at Coral Springs was named to the Florida High School Athletic Association’s All-Century Team.

According to his bio on the FHSAA website, Hutchinson played football and won letters at Coral Springs from 1992-1995. It says he also won letters in basketball and also lettered in baseball. He was the 1995 Greater Fort Lauderdale Touchdown Club Player of the Year and named a high school All-American and one of the top three high school linemen in the country by Super Prep Magazine.

Headed to Canton for the @ProFootballHOF. 👏

James caught college football recruiter eyes as a junior when he led the State of Florida in rushing with 2,127 yards and 29 rushing touchdowns. That year he led Immokalee to a 7-4 mark and a district championship.

His senior season in 1995 was a bit of a disappointment for him as he missed the first half of it with a dislocated elbow. However, after he became healthy, he returned to form.

After an 0-5 start, Immokalee bounded back to finish the regular season 4-6, losing to Hardee in the first round of the playoffs. James ran for 226 yards in his final game, giving him 1,304 yards with ten touchdowns for his final scholastic campaign. He was named a Parade Magazine All-American.

Heading into Immokalee’s 1995 playoff game against Hardee, his head coach Darrell Bullock said this about James to The Tampa Tribune, “He not only is one of the best tailbacks in Florida, he’s one of the best in the nation. I coached at Penn State and Michigan and I’ve seen a lot of special backs there. He ranks right up there with them.”

Peyton showing some love for his running back. #PFHOF20 pic.twitter.com/mjxGWxm8F3

Polamalu was a running back/defensive back at Douglas High School. He began playing as a freshman and rushed for 430 yards with five touchdowns, plus he had two interceptions on defense. As a sophomore, Polamalu rushed for 1,003 yards and had 340 receiving yards. He scored 20 TDs and picked-off six passes to make the All-Far West League first team as a running back and second team as a defensive back.

As a junior in 1997, Polamalu rushed for 22 touchdowns with 1,040 yards, plus he grabbed eight interceptions. He was named first team 3A All-State and All-Far West League Offensive Most Valuable Player.

Several injuries severely impacted his senior season in 1998. He only played in four games, but still was named 1st Team defensive back on the Far West League all-star squad. On offense, he rushed for 671 yards and nine touchdowns.

Polamalu was also an outstanding baseball player who made all-state. He also made all-league teams in basketball.

Where 2018 Hall of Fame Finalists went to High School

First and Fisher: A look at the late Don Maynard’s high school days in Texas