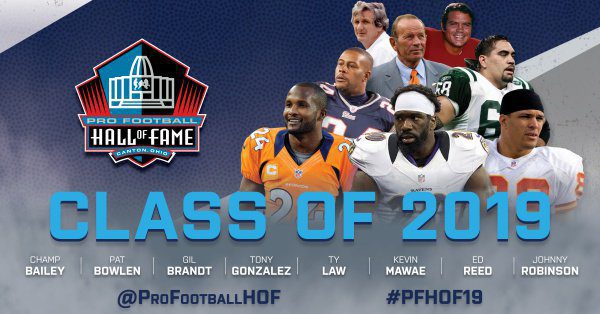 The Pro Football Hall of Fame will grow by eight this year. Saturday night, the Class of 2019 was announced.

At Charlton County, Bailey was a multi-talented player who played several positions, excelling at all of them.

Bailey played quarterback, running back, defensive back and he also excelled as a special teams player as a kick and punt return. As a running back he ran for 3,57 3 with 58 touchdowns. During his senior year, Bailey rushed for 1,850 yards with 28 touchdowns.

One of his most memorable games came during his senior season against Atkinson when he ran for 417 yards and scored six touchdowns. The 417 yards is still the ninth most in a single game in Georgia.

Bailey concluded his scholastic career as a Parade All-American after amassing over 5,000 yards in total offense was a QB and running back. On defense, Bailey nabbed eight interceptions in his high school career.

Gonzalez was top-flight two-way player for the Huntington Beach Oilers as a tight end and linebacker. He also excelled in basketball. He also played both sports in college for the University of California at Berkeley.

How good was Gonzalez, who was on the same Parade All-America team as Peyton Manning, in high school? The year after he graduated, his No. 44 was retired by the school. Gonzalez was on the

Law, who joins Aliquippa alum Mike Ditka as Quips in the Pro Football Hall of Fame, was a multi-sport athlete in high school, playing football, basketball, plus he ran track.

He was a threat on both sides of the ball, finishing he senior season with a state championship. He finished his senior season with 28 catches for 588 yards, plus he ran the ball 57 times for 508 yards. On defense, he intercepted 11 passes.

Mawae travelled a lot as a kid because his father was in the military. He was born in Georgia, but play his high school football in Louisiana. He was a first team all-time offensive lineman during his senior season after making the second team as a junior.

Like many of the aforementioned players, Reed played extremely well on both sides of the ball. As an all-state defensive back, Reed had 83 tackles, seven interceptions with three forced fumbles and 12 passes deflections.

Bowlen dreamed of playing college football after being a wide receiver on his high school team where he caught several of touchdown passes during his senior year. According to media reports, Bowlen went to the University of Oklahoma that was coached by the legendary Bud Wilkinson. He didn’t make the Sooners because he was too small and too slow to walk-on..

He was also a member of the school’s club hockey team.

Brandt attended North Division High School in Milwaukee, Wisconsin where he was the team’s starting defensive back.

I'm not sure I could have hand-picked a better class to go into the @ProFootballHOF with. These are not only giants of the game but great men. I'm so honored, and more than that, humbled. pic.twitter.com/Vb7SrelHii