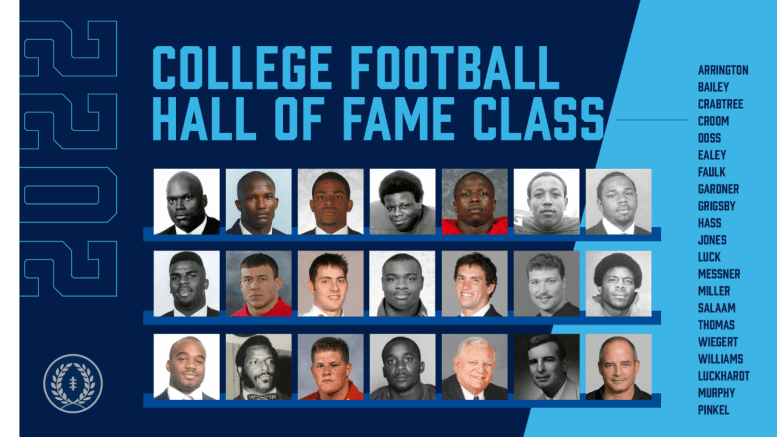 The College Football Hall of Fame will be expanding by 18 players and three coaches later this year when the Class of 2022 is inducted.

Monday, the National Football Foundation (NFF) announced the 2022 College Football Hall of Fame Class during “Championship Drive Presented by Capital One” on ESPN.

Below, we take a look at where this year’s honorees played their high school football.

Arrington was an outstanding two-way player North Hills High School. He played running back and linebacker at the western Pennsylvania school. He closed-out his scholastic career by being named the Parade Magazine National Player of the Year to go along with many other national honors.

While Arrington focused on the defensive side of the ball at Penn State and in the NFL, he was one of the best runners in the nation, finishing his career with 4,357 yards on 711 carries with 72 touchdowns. He was also very good on the basketball court and in Track & Field.

In 2019, he returned to the high school game by taking the head coaching job at Maranatha High School in Pasadena, California. He led the program to a 15-10 record before resigning after the COVID-19 shortened season in May 2021.

Like Arrington, Bailey was a standout two-way player at Charlton County. On offense, Bailey was a dual-threat quarterback. He still holds the school record for rushing yards in a season with 1,858 yards. In one game, he ran for 417-yards, which also stands as the Charlton County’s single-game record.

Bailey, who was inducted into the Pro Football Hall of Fame in 2019, won a state gold medal in Track & Field, capturing the triple jump title with a leap of 46 feet and 9 inches. 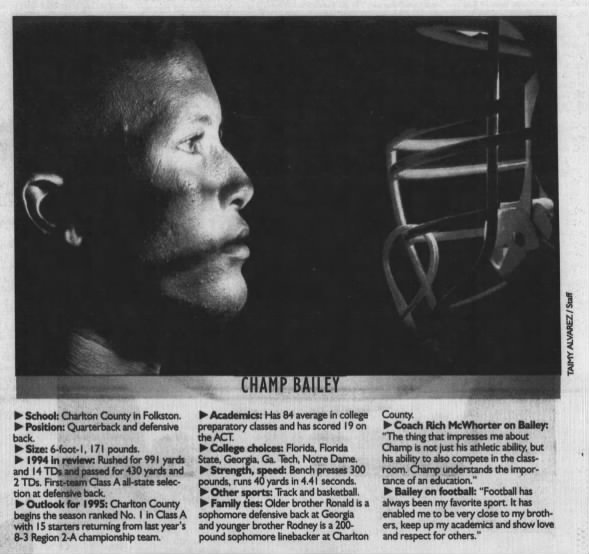 Like Bailey, Crabtree also played quarterback during his days at Dallas Carter. During his senior season, according to Wikipedia, he passed for 870 yards with eleven touchdowns on just100 attempts. He also rushed for 646 yards with nine touchdowns.

Croom didn’t have to journey too far for his college football career. After playing linebacker and tight end at Tuscaloosa High School, Croom stayed in-town to play at the University of Alabama.

After a brief one-year career in the NFL, Croom turned to coaching under Paul “Bear” Bryant at Alabama. He became the Southeastern Conference’s first African-American head football coach at Mississippi State.

Doss led the Canton McKinley to back-to-back state championships during his junior and senior seasons as the team’s running back and safety. The ’97 McKinley team was crowned national champs by USA TODAY.

Below you can watch a great goal line stop by Doss in the state playoffs.

Ealey was undefeated (18-0) as the quarterback of the Portsmouth, Ohio school. He led the school to two football championships, plus he also won an Ohio basketball state championship.

In 1972, Ealey became the first African-American quarterback to win a Canadian Football League (CFL) Grey Cup when he lead the Hamilton Tiger-Cats to the league title in 1972.

Before winning three Super Bowls as a running back with the New England Patriots, Faulk was dazzling Louisiana high school football fans at Carencro High School. He led the Golden Bears to Louisiana’s 1992 5A state title as the team’s quarterback. During his scholastic career, Faulk was 33-5 under center. He was named to USA TODAY and Parade Magazine’s All-America Teams.

Below, you can watch Faulk play quarterback during his sophomore season in 1992.

Following his retirement from the NFL, Faulk served as an assistant coach at Carencro from 2013 through 2017. 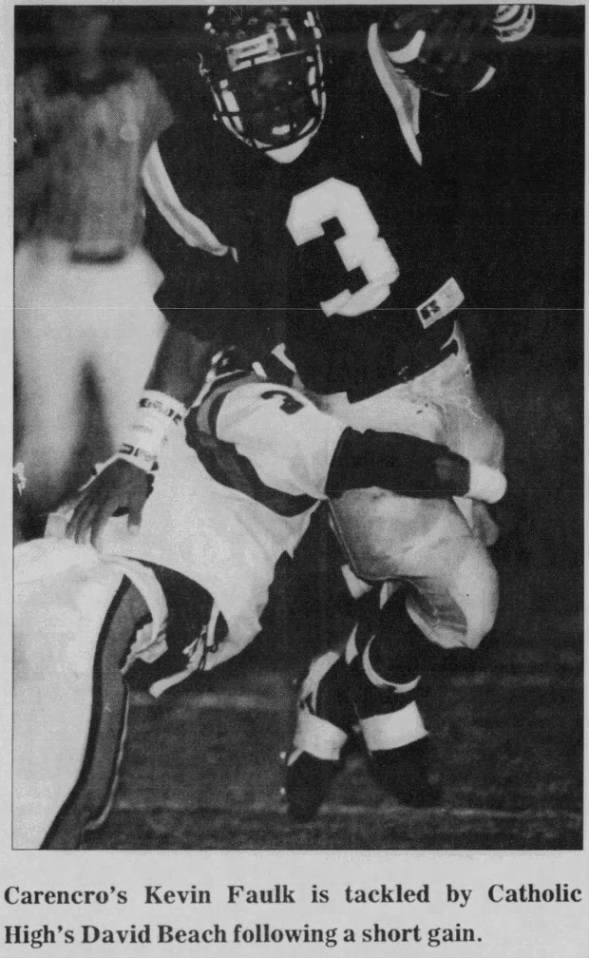 Gardner was an All-State defensive lineman for Cathedral High School in Indianapolis in 1985, before going on to become an All-American at the University of Illinois. The Atlanta Falcons chose Gardner in the fourth round of the 1991 NFL Draft.

Grigsby was an unheralded high school football player in Canton, Illinois. With no offers to play college football, Grigsby eventually went to Illinois State, which led to him being drafted by the Kansas City Chiefs in the fifth round of the 2005 NFL Draft.

The two-way performer at wide receiver and defensive back played for three years at Jesuit. During his senior season in 2000, Hass posted big receiving number that help Jesuit to Oregon’s 4A state title. 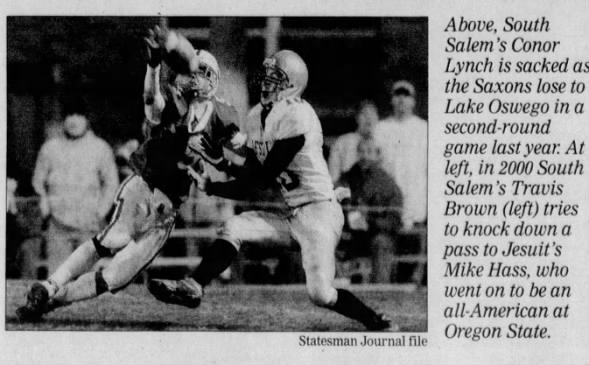 Hass caught 79 balls for 1,739 yards and 21 touchdowns. Despite his numbers, he wasn’t offered one Division I scholarship. He ended-up walking-on at Oregon State. He was selected in the sixth round of the 2006 NFL Draft by the New Orleans Saints

Below you can see that Jones was an All-Dade County pick by the Miami Herald after his senior season. USA TODAY named him one of the Top 25 players in America. He recorded over 100 tackles during his senior season, including a 29 tackle (16 solo) game against Carol City. 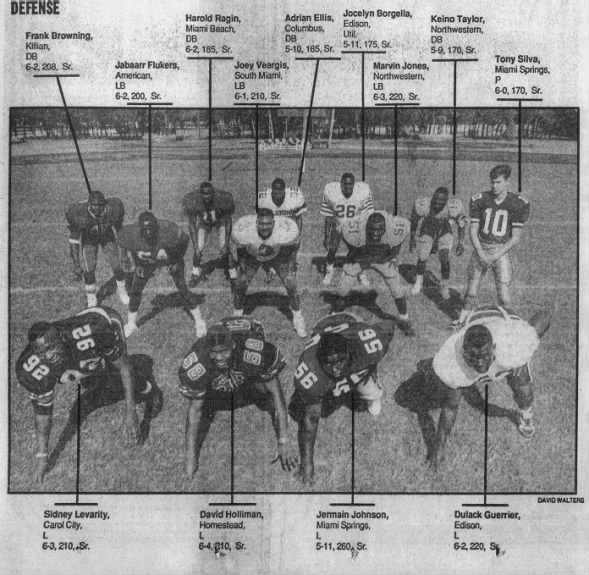 Luck, the son of Oliver Luck, who played quarterback for the NFL’s Houston Oilers for five years, played at Stratford High School near Houston. He passed for 7,139 yards and 53 touchdowns, plus he ran for 2,085 yards.

Messner was a two-way starter at DCC, playing tight end and nose guard in the early 80’s. He earned all-state honors as a senior. He is a member of the Catholic Central and Catholic League Halls of Fame.

After an outstanding career at the University of Michigan, he was drafted as an undersized defensive tackle by the Los Angeles Rams in the sixth round of 1989 NFL Draft.

Miller had quite a finish to his scholastic career. As a junior point guard he helped lead Mitchell’s basketball team to a state title. Then in the spring, he won state gold medals in the 100 and 200 sprints. Finally, he closed-out his football career in the fall with 2,785 yards rushing with 37 touchdowns and 224 points in 10 games. Mitchell finished runner-up in the state football championships.

In 2020, Miller was elected to the Colorado Sports Hall of Fame for his high school football achievements.

Salaam played 8-man football at La Jolla Country Day outside of San Diego, California. As a high school senior, the future Heisman Trophy winner at Colorado was named to the state’s Small Schools All-State Team as a multi-purpose back. He finished his high school career with 4,965 yards with 112 touchdowns.

A native of the small town of Heidelberg, Mississippi was a four-year letterman in football and track and field in high school. At the age of 16, Thomas began his college career at Alcorn A&M (now Alcorn State). In 1973, as the team’s center, he made history as the first and only offensive lineman to be named the Southwestern Athletic Conference’s Offensive Player of the Year, beating out future Hall of Fame running back Walter Payton for the honor.

For the past two decades, Thomas has been the commissioner of the Mid-Eastern Athletic Conference (MEAC).

The future 12-year NFL veteran was a two-way player at Bergen High. A member of the Nebraska High School Hall of Fame, Wiegert earned all-state football honors during his senior year after only playing five games. He missed his first six games because of illness, but he recorded 67 tackles in five games. He was also a very good basketball player, making 61-percent of field goal attempts

In high school, Williams played multiple positions at Logan High in Union City, California in the mid 90’s. On offense he played quarterback and wide receiver. On defense, he was a defensive back, the position that led him to becoming a six-time Pro Bowl player with the Dallas Cowboys

In addition to the players, three coaches will be inducted — John Luckhardt of Washington & Lee (Pennsylvania), Bill Jack Murphy of Memphis (Tennessee) and Gary Pinkel of Toledo (Ohio) and University of Missouri.

The 2022 College Football Hall of Fame Class will officially be inducted during the 64th NFF Annual Awards Dinner on December 6.