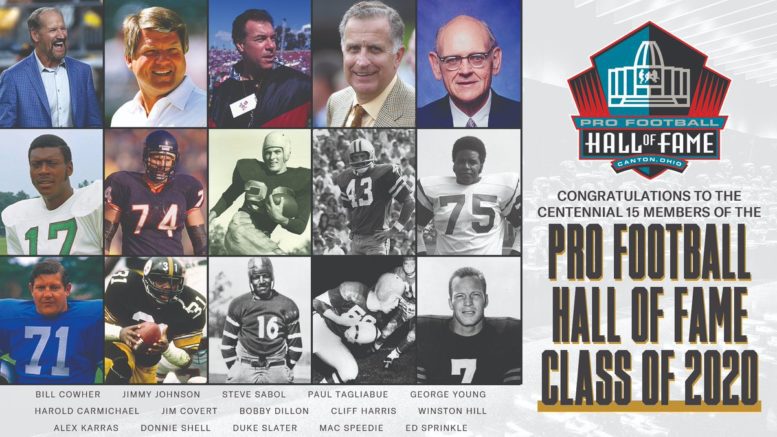 The Centennial Class of 2020 for the Pro Football Hall of Fame continues to grow. Tuesday morning, the 13 new members were announced, joining former head coaches Bill Cowher and Jimmy Johnson who were named to the class over the weekend.

Below are their new honorees and notes on their high school playing days.

In high school, Carmichael was a three-sport athlete. He played quarterback, wide receiver and defensive back. He was a shot putter on the track & field team and a star basketball player.

In a 1978 article in the Tampa Bay Times, Carmichael was described by the newspaper as possessing a “right arm that could throw a ball through a brick wall — if he could hit it.”

Raines’ head coach Earl Kitchings said, “When he really threw the football, he started tearing up my receivers’ hands, splitting their hands. We stopped letting him throw the ball so much and started running double or triple reverses.”

James Day, an assistant football coach at Raines, said the following about Carmichael in the ’78 story:

“He was just a tall, rawboned kid with no fat anywhere. He was the star. He barely left the field.

With his recent election to the #PFHOF20 class, we celebrate the career of @lookitin!@Eagles pic.twitter.com/w0REeOVO89

Covert is another product of western Pennsylvania high school football, which has produced so many other Hall of Fame players like Mike Ditka Tony Dorsett, Joe Montana, Joe Namath…and the list goes on.

Covert was a great two-way player at Freedom High School in the powerful WPIAL (Western Pennsylvania Interscholatic Athletic League). In 1989, Covert was named to the The Pittsburgh Press‘ 1st Team Western Pennsylvania All-Time Scholastic Team as an offensive lineman and a defensive tackle. The first-team All-State player during his senior season was the only player to be named on both sides of the ball on the all-time squad.

He was also an outstanding wrestler, who pinned all but one of his opponents during his senior season.

#ICYMI: Jim Covert has been elected to the Pro Football Hall of Fame as a member of the Centennial Slate for the Class of 2020. @ChicagoBears | #PFHOF20 | @gmfb pic.twitter.com/yX6NVmPrQe

Like Covert, Cowher is a western Pennsylvania product. He played football, basketball and was part of the track team at Carlynton High School. As a senior, he was named a first team linebacker on the Pittsburgh Post-Gazette’s Class A All-Star team in 1974. Cowher was also all-WPIAL as a center.

Dillon is a member of the Texas Sports Hall of Fame. According to his bio, during his senior season at Temple High, Dillon was part of a team that finished 6-2-1, losing 13-6 to eventual state champion Waco in the 10AA district championship game that was played before 12,000 fans at Temple’s Woodson Field.

On offense as a wingback, he was described as being very fast. He was also a member of the school’s track and field team, competing in the 100 yard dash. He was named 3rd team All-District following his senior season.

#ICYMI: Jim Covert has been elected to the Pro Football Hall of Fame as a member of the Centennial Slate for the Class of 2020. @ChicagoBears | #PFHOF20 | @gmfb pic.twitter.com/yX6NVmPrQe

In addition to football, Hill played tennis a Weldon High School in Gladewater, Texas. In a 2016 story in the Longview News-Journal after Hill’s death, his head coach Walter Derrick remembered his student-athlete as a “good kid who took care of business in the classroom and on the field.”

Derrick added, “He was as good a pass blocking tackle as I ever saw. He followed the Weldon way. That was a long time before the no-pass, no-play. Winston took care of business (in the classroom).”

The most decorated Jet in franchise history will be enshrined in Canton 🙌 pic.twitter.com/aj1VvKhjWF

During his time at Emerson High School in Gary, Indiana, Karras was a three-time all-state player. He won those honors at three different positions.

As a sophomore he was an all-state offensive guard; as a junior he moved to offensive tackle; and as a senior was play end and fullback. He led his conference in scoring with 68 points as a senior.

On Emerson’s basketball team, Karras played for four years as a center and a guard, making the all-conference team in two of those years. He was a catcher on the team’s baseball team and was one of the top shot-putters in the state with a 55-foot shove.

In addition to playing sports, Karras was also a member of school’s drama department that he called “wonderful” during a 1983 interview in The Times in Munster, Indiana. For those of you who don’t know, Karras went-on to a career as an actor and sportscaster.

Karras appeared in the movie Blazing Saddles and was one of the co-stars of the sitcom Webster. He also was part of the Monday Night Football crew for three years in the 70’s.

With his recent election to the #PFHOF20 class, we celebrate the life and career of Alex Karras!@Lions pic.twitter.com/JQIlC1ga7B

Shell played four sports in high school — baseball, basketball, football and track. His high school football No. 62 is the only number retired by Whitmire. During his senior year, as a linebacker, Shell led a defense that reportedly didn’t allow a touchdown.

He made the 1970 North-South All-Star game in Columbia, South Carolina after being named an all-conference player on both sides of the ball in the Piedmont 2-A Conference. He was first team all-state in Class AA as an offensive guard and averaged almost 11 unassisted tackles per game from his linebacker position, according to The Greenville News.

#ICYMI: Donnie Shell has been elected to the Pro Football Hall of Fame as a member of the Centennial Slate for the Class of 2020. @steelers | #PFHOF20 | @gmfb pic.twitter.com/y3Y1xY8ZhU