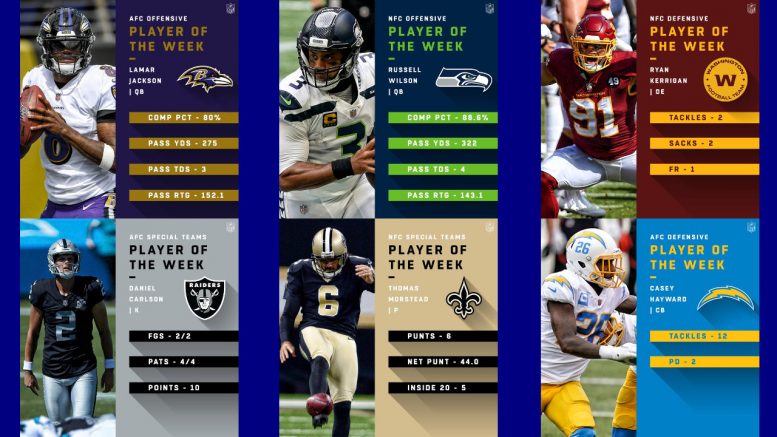 With Week 1 of National Football League’s 2020 season in the books, let’s take a look at where the Players of the Week played their high school football.

We’ll start with Baltimore Ravens quarterback Lamar Jackson, the AFC Offensive Player of the Week after throwing for 275 yards and three touchdowns on 20-of-25 passing (80%) with no interceptions and a 151.2 rating in Baltimore’s lopsided 38-6 win over the AFC North-rival Browns.

Jackson played his high school football at Boynton Beach High School in Florida. He transferred to Boynton Beach after beginning his career at Santaluces High.

Below, you can watch video of Jackson, who was rated a 4-star college football prospect in 247Sports.com’s composite rankings.

After a 9-2 senior season, Jackson was named the Lou Groza Awards High School Player of the Year in Palm Beach County.

Seattle Seahawks QB Russell Wilson is the NFC Offensive Player of the Week.

Wilson lit up the scoreboard with four touchdown tosses in the Seahawks’ 38-25 victory over the Atlanta Falcons on Sunday. Phenomenally accurate on the day, Wilson was 31 for 35, completing 88.6% of his throws for 322 yards and a 143.1 rating with no interceptions. The 88.6 completion percentage was the third-highest in an NFL game in league history (min. 35 attempts).

Wilson was a three-sport athlete at Collegiate School in Richmond, Virginia. His father, Harrison Wilson III, played football and baseball at Dartmouth. He was on the San Diego Chargers preseason roster in 1980 as a wide receiver.

NFC Defensive Player of the Week honors go to the Washington Football Team’s Ryan Kerrigan, who had two sacks and a fumble recovery against the Philadelphia Eagles. Kerrigan surpassed Dexter Manley to become the club’s all-time sack leader. Kerrigan has 92 sacks, which places him one ahead of Manley.

The Indiana native attended Muncie Central High School where he was a two-way standout at defensive end and tight end. During his all-state senior season, Kerrigan recorded 19 sacks, plus on offense he caught 40 balls, six of them for touchdowns. 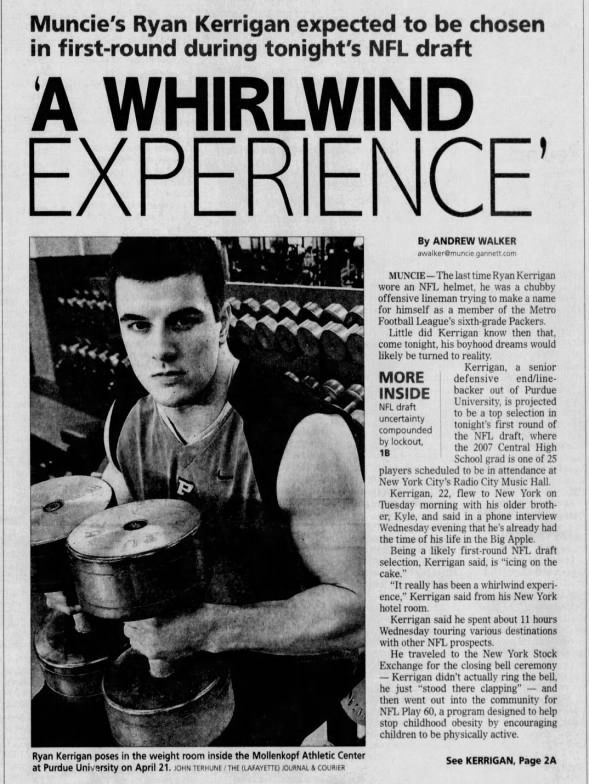 Without a perfect day from kicker Daniel Carlson, it’s unlikely the Las Vegas Raiders would have defeated the Carolina Panthers, 34-30, on Sunday. Thus, Carlson was voted AFC Special Teams Player of the Week. The Silver and Black booter was perfect on the day, piling up 10 points as he hit all four of his extra points and both of his field goals, including one from a career-long 54 yards.

Carlson played at The Classical Academy in Colorado. During his senior season, Carlson was considered the best high school football kicker in America when he booted ten field goals and 54 kickoffs for touchbacks.

Carlson, who played collegiately at Auburn, was also a very good soccer player in high school.

As the New Orleans Saints held down the Tampa Bay Buccaneers for a 34-23 win on Sunday, it was a great effort by Saints punter Thomas Morstead that pinned down the Bucs offense over and over. Morstead had five punts inside the 20-yard line on Sunday. In six total punts he averaged 44 yards per boot and set up the Bucs with poor field position throughout.

Morstead played at Pearland High School in Texas. In addition to his on-field talents, he was also very talented in the classroom, earning Academic All-State honors.

Morstead, whose foundation that he founded with his wife Lauren is called What You Give Will Grow has donated over $2.5 million, has a booked written about him called The Middle School Rules of Thomas Morstead.

The book authored by Sean Jensen “shares how Thomas learned about his cultural roots, handled being bullied for his appearance, and dealt with the disappointment of not making the high school varsity soccer team.”

Fayetteville goes back-to-back in 7A