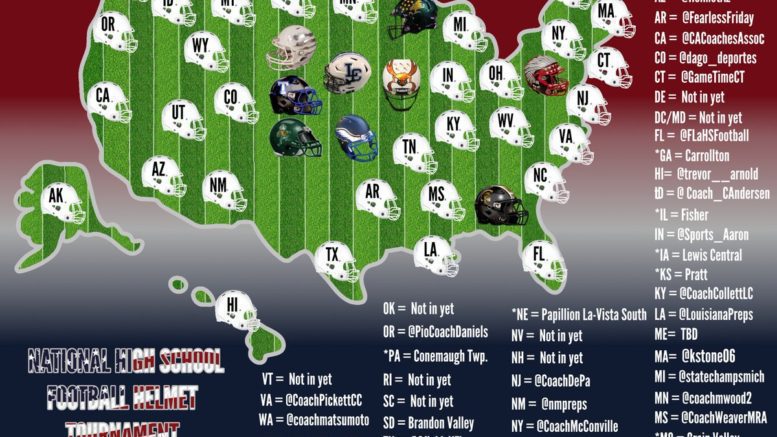 The idea begin when three guys in Pennsylvania — Chris (@END2008), Ian (@thesteelersnat) and Matt (@pa_fb_history) — decided to take to Twitter to determine the best helmet in the Keystone State. Using the 563 helmets for teams in the Pennsylvania Interscholastic Athletic Association (PIAA) that Chris designed, the trio put-on a Battle Royale with fans voting for their favorite helmet. BTW, Chris designs the helmets you see on High School Football America.

When the dust settled, the Conemaugh Township Indians were voted the best helmet in Pennsylvania. The Indians beat Marple Newtown High in the finals

Conemaugh Township collected 57-percent of the votes and picked-up this champion mini-helmet.

This mini helmet is on its way to Davidsville, thanks to the awesome @Hubbyshelmets. If you want gifts (especially for your senior FB players), get in touch with him!@END2008 @PaFootballNews @EPAFootball @samzam14 @ConTwpSD pic.twitter.com/zeHvU6CcRG

This weekend, I spoke to the guys about the origins of their idea and you can listen to our chat on the High School Football America Podcast below.

Now, as far as the national tournament, which Conemaugh Township will be in representing Pennsylvania, you can follow along on Twitter at @hshelmettourney.

Right now, there are 41 other states in the battle to move-on to the national championship tournament that is expected to begin in early June.

2017 NFL Draft – Where potential first rounders when to high school

38 States, plus Washington DC and three other countries represented in 2016 NFL Draft