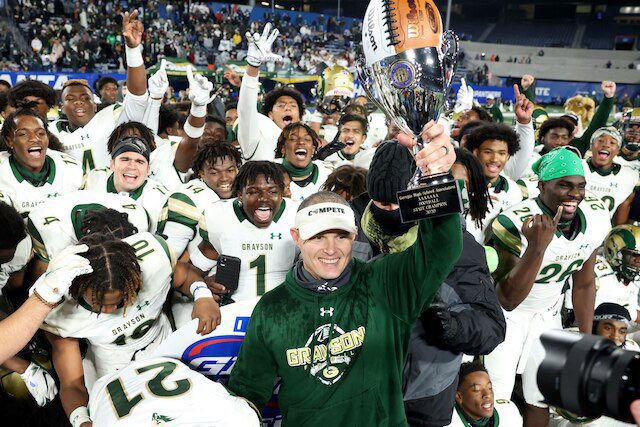 The two-time defending state champs trailed by ten in the third quarter, but early in the fourth, the Bearcats’ special teams tied things up at 38-38.

Aledo blocks the QB punt and returns it to the house!!! Caden Anderson with the scoop and score!!!

We’ve got a tie ball game.

With under three minutes to play, Demarco Roberts scored the game-winner.

Demarco Roberts has been a game changer all night. This time he breaks off the run that could seal it. Touchdown Aledo!

Roberts rushed for a game-high 268 yards on 34 carries.

On the other side of the bracket, Crosby will play Liberty Hill next week for the right to go to the 5A Division II state championship.

The nation’s No. 1 team, North Shore, is closing-in on its try for a three-peat. The Mustangs advanced to the state semis after beating Ridge Point.

North Shore will play Westlake in the state semis. The Chaps, ranked No. 7 in our national rankings shutout Cibolo Steele 34-0.

Westlake strikes first. Huge run by Zane Minors a 2021 RB gets the Chaps up 7-0. #txhsfb pic.twitter.com/PMHQPVcCkf

On the other side of the 6A Division I bracket, No. 8 Duncanville will play No. 29 Southlake Carroll. Duncanville blew by No. 25 DeSoto 56-28 Saturday night.

In Class 6A Division II, No. 24 Cedar Hill will meet No. 38 Denton Guyer in one state semifinal next Saturday.

Cedar Hill needed overtime to be Rockwall-Heath 27-24. After Heath kicked a field goal on the first possession of overtime, the Longhorns won it on a touchdown pass from Tennessee-recruit Kaidon Salter.

Guyer needed triple overtime to beat Prosper, ranked No. 120 in the nation. Guyer, which finished runner-up in the 6A Division II championship in 2019, won it on Texas A&M-recruit Eli Stowers’ touchdown run (below).

Eli Stowers is the hero yet again, driving and plunging into the end zone to send the Wildcats into the state semifinal. What a game. @DentonGuyer_FB is moving on.

I’ll be back more shortly with more from McKinney. #txhsfb pic.twitter.com/U766uPRHlb

On the other side of the 6A Division II bracket, No. 40 Katy rolled past Clear Falls 51-14. The Tigers will face Buda Hays next week. Hays beat Vandegrift 38-10 on Saturday to advance to the state semis.

Cedar Park quarterback Ryder Hernandez threw for 385 yards and four touchdowns as the Timberwolves beat Manvel, ranked No. 65 in the High School Football America 100 national rankings powered by BlackMP Living Water, 52-42 in the Class 5A Division I quarterfinals. Next week, the Timberwolves get Veterans Memorial in the state semifinals.

CLASS 6A DIVISION I

CLASS 5A DIVISION I