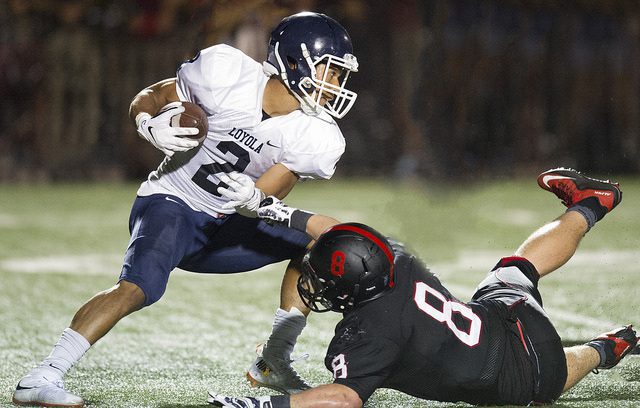 The Loyola Cubs may be among the best teams in Los Angeles in 2015, but they also have the priciest prep ticket in Southern California on Friday night (Photo: Loyola High School)

Among the merits of high school football is its universally affordable price tag. There are no NFL, NBA or even college sports pricing schemes in the high school ranks, with many schools happy to let in as many fans as want to come for $5 or less per ticket.

That’s not the case Friday in Los Angeles, where a non-league game is commanding face value prices of $15 per ticket. As reported by the Los Angeles Times’ Eric Sondheimer, Los Angeles Loyola is charging fans $15 per ticket for its game against Palmdale Highland High. The reason for the steep ticket cost is an attempt to help recoup a $100,000 outlay that the school paid to improve infrastructure and shut down Venice Boulevard for the four games it plans to play on campus in 2015. The scheduled pass-through charge for the subsequent three on-campus games is less dire — plans have the price set at $8 per ticket — but a full attendance with plenty of paying customers for the Highland contest would be needed to make that a reality.

There’s an added cost to the already steep tickets, too: Parking at Loyola will run at least $10, meaning that an average fan is out $25 to take in the game.

To put that $25 total charge in perspective, the same amount of money could buy you a ticket to USC’s football season opener against Arkansas State on Saturday right now on StubHub. A ticket to the Trojans’ second game against Idaho is even cheaper.

As is usually the case in high school sports, the silver lining for all this comes for the students, as student fans with both Loyola and Highland IDs will be allowed free admission. Let’s just hope their parents are willing to pay full freight so that the season moves forward as planned.